James Carville’s recommendation that Obama put his Presidency on the line going after Rush Limbaugh has been a failure. Rush’s listeners have increased and the entire Flap has proven to be nothing but a “distraction.”

You see, Carville and his CNN buddy Paul Begala harbor personal resentment at Limbaugh who started the decline of the Bill Clinton Administration in 1994 and mocked Hillary’s primary election bid against Obama with “Operation Chaos.” You would think Rahm Emanuel and Obama would know better?

Flap supposes Rahm could NOT help himself.

If the first six weeks of the Barack Obama administration can be summed up in one sentence, it would be this: Obama fiddled with Rush Limbaugh while Wall Street burned.  Politico reports that the demonization of Rush Limbaugh comes as a deliberate strategy by Obama and the Democrats, who hoodwinked people into believing that a Chicago Machine pol really wanted to change the partisan nature of politics.

But, then again, James Carville and Paul Begala are Charter Members of the Clinton Cabal, now aren’t they?

Despite efforts by the Obama political team and its surrogates to link Rush Limbaugh to the Republican Party, just 11% of GOP voters say the conservative radio commentator is the partyâ€™s leader.

American voters are seeing through this FAUX-Democrat manufactured FLAP.

After President Bush, the LEFT needs someone to demonize and then associate with the Republican Party while distracting Americans from the retread, flailing policies of the Obama Administration.

Not working, is it?

Visit msnbc.com for Breaking News, World News, and News about the Economy

Hot Rod professes his innocence in the video above, “I have done nothing wrong…” and “And I’m not going to quit a job the people hired me to do because of false accusations and a political lynch mob.”

It will be a LONG couple of months for the people of Illinois and the Obama Administration because it is ALL going to come out – the Chicagoland way.

Rahm Emanuel has been photographed along with David Axelrod at Barack Obama’s side as “The One” has announced his cabinet members this week – along with the cover-up mantra of not wanting to impede the Blagojevich investigation at the request of the United States Attorney, Patrick Fitzgerald. But, the effervescent and garrulous Emanuel who MAY become Obama’s Presidential Chief of Staff has been mute as to his involvement in the political scandal.

The report is that Patrick Fitzgerald has Rahm on tape 21 times talking to Blagojevich or his staff about appointing Obama’s pick to the U.S. Senate. And, who has custody of the tapes?

Nobody, except the United States Attorney – until Blagojevich is indicted.

Rahm Emanuel is afraid that if he comments or tries to spin the flap that the tapes will prove inconsistencies and/or mistatements, rendering him “radioactive” and OUT THE DOOR. So, he remains quiet and Obama covers for him – at least until next week (December 22nd).
Previous: 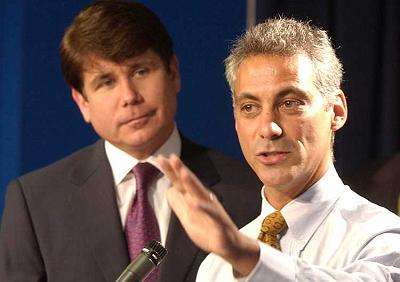 Emanuel privately urged Gov. Blagojevich’s administration to appoint Obama confidante Valerie Jarrett, and the Sun-Times learned Tuesday that he also pressed that it be done by a certain deadline.

Jarrett was initially interested in the U.S. Senate post before Obama tapped her to be a White House senior adviser, sources say.

The disclosure comes days after Obama’s camp downplayed Jarrett’s interest in the post.

At one point, an “emissary” who said he represented Jarrett had discussions with Blagojevich chief of staff John Harris and the governor about naming Jarrett to the post, according to a criminal complaint.

In addition to the discussions, Emanuel submitted a list of names of candidates suitable to the Obama team to the governor’s administration. Jarrett was not among those names because she had pulled herself out of the running at that point, a source with the Obama camp said.

Obama said Monday that an internal report detailing any staff contacts with the embattled governor or his aide would be made public next week.

Emanuel’s discussions do not indicate he was involved in dealmaking with the governor. However, his deeper involvement creates a sticky political situation for Obama.

The political web is woven tighter for Rham Emanuel to take the fall for inappropriate political trading for Obama’s Senate seat. Plus, the fact that the Feds have him on tape 21 times discussing the matter with either Hot Rod Blagojevich or his staff will implicate him further in any Blago impeachment, Grand Jury indictment and/or trial.

While Obama is close to Emanuel and notwithstanding David Axelrod’s spin control this morning on “Morning Joe,” Barack Obama will need to assess whether Rham will be able to assume duties of COS to POTUS while under a cloud of political scandal.

Was the SEIU an Obama – Blagojevich Intermediary for the Senate Seat? Part Two

Barack Obama on BlagoGate:â€Absolutely Certainâ€ No Deal Making From Transition Team – But, Who Tipped Off Valerie Jarrett?

Was the SEIU an Obama – Blagojevich Intermediary for the Senate Seat?