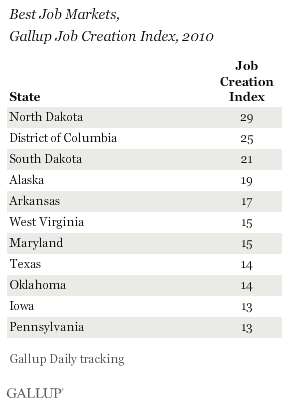 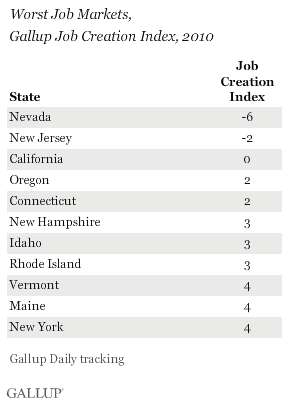 I am not surprised especially with regard to Nevada and California being poor job markets, according to the latest Gallup Poll.

Having a significant presence of natural resource-based industries was a distinct job-creation advantage for states such as North Dakota, West Virginia, Oklahoma, and Texas. These were among the top 10 job markets in 2010, as they were in 2008 and 2009. Also among the top 10 in 2010 were Alaska — another energy state — and Washington, D.C., and Maryland, both of which benefit from having a large percentage of federal government workers. Mostly farm commodity states — including Arkansas, South Dakota, Iowa, and Pennsylvania — fill out the top 10.


States showing the most improvement in job market conditions between 2009 and 2010 included the long-depressed manufacturing states of Michigan, Ohio, and Pennsylvania — likely reflecting the significant improvement in U.S. manufacturing last year. Also among the most improved were 5 of the 10 states with the worst job markets in 2009, giving them the most room to improve: Oregon, Delaware, Arizona, Minnesota, along with Michigan. Reflecting the growth of the federal government, the District of Columbia was not only the second-best job market but also the second-most improved job market in 2010.

Eight of the states showing the least improvement last year were in the 10 best job markets in 2009, including New Mexico, Nebraska, West Virginia, Louisiana, Maryland, Oklahoma, Texas, and Virginia. Also among those showing the least improvement are several states in the Northeast — New Jersey, Vermont, and New York — and two smaller states in the West, Montana and Wyoming.

So, what does this mean politically?

It is noted that only two key battleground state in the Electoral College are listed – Nevada and Virginia. The other states are either very blue or very red which means these states in the extreme job markets will be ignored during the race for 2012.

Nevada’s unemployment rate, plus President Obama’s comments about Las Vegas may play well there for the GOP nominee but demographic changes (more Hispanic and union, Clark County voters) if they show up and vote may be too much to overcome.

Virginia is a state where the GOP will need to perform well if they wish to beat President Obama.

The GOP nominee will concentrate their campaign in other states which have poor unemployment numbers.

Looking ahead, it seems likely that the overall pattern of state job market conditions across the nation in 2011 will remain similar to those of the past three years. Energy prices are surging and gas is now $3.29 a gallon nationwide, compared with $2.69 a year ago. High oil prices tend to improve hiring activity in energy-producing states. Similarly, high commodity prices should help job conditions in the farm and mining states.

On the other hand, the housing market continues to suffer. This suggests that states with the worst housing conditions will continue to see relatively difficult job market conditions for some time.

Of course, it is possible that state and federal budget cutbacks could hurt job market conditions in some states more than others, particularly those having the worst budget problems, such as California, New York, and Illinois. Or, federal budget cuts could hurt states with a large number of federal government employees. Alternatively, U.S. manufacturing and exports could continue to increase, providing more jobs in industrial states.

All in all, not a good poll about jobs for the incumbent President and Democratic U.S. Senate incumbents going into election 2012.

This will not help President Obama as he prepares to run for re-election.


Unemployment, as measured by Gallup without seasonal adjustment, increased to 9.8% at the end of January — up from 9.6% at the end of December, but down from 10.9% a year ago.

Some political pundits maintain that if the unemployment rate does not decrease to below 8% that Obama will NOT win re-election. So far, economic conditions do not look favorable for him.

Still, Gallup’s measures paint a real-time picture of the current job realities on the ground: nearly 1 in 10 Americans in the U.S. workforce are unemployed, nearly one out of five are underemployed, and the nation’s overall hiring situation has not improved over the past four to six months.