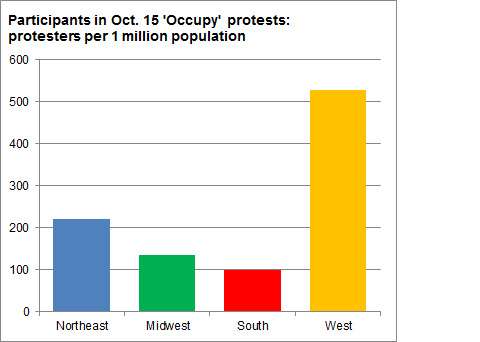 Nate Silver of the New York Times has this analysis.


The nascent movement known as Occupy Wall Street had its largest single day of protests on Saturday. And a funny thing happened: most of the action was far from Wall Street itself.

No, I don’t mean at Zuccotti Park — which is not, technically, on Wall Street. Nor do I mean Times Square — all of 19 minutes away from Wall Street on the ‘C’ train — where large crowds of protesters gathered on Saturday.

Instead I mean Europe, where crowds in cities like Rome, Barcelona and Madrid were estimated at 200,000 to 500,000 per city (more, probably, than the protests in the United States combined). And I mean California and other parts of the western United States, where crowds were proportionately much larger than in the Northeast or elsewhere in the country.

Leaving aside Europe, where the Occupy protests merged, not always seamlessly, with those sponsored by left-wing groups, the distribution of protests throughout the United States may reveal something about the political orientation of the protesters.

Yep, from the West – where there is higher unemployment as well.