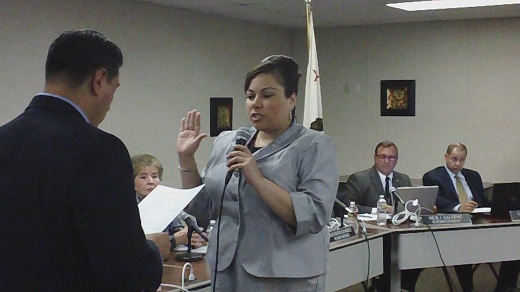 Yes, Maria-Elena is a friend of mine, and a fellow Los Angeles Roadrunner (training program for the Los Angeles Marathon). She was appointed to the El Monte Union High School Governing Board of Trustees a couple of weeks ago, replacing a Trustee who resigned under a cloud of corruption.

Here is an earlier piece.

The board had operated one member short for more than a month following Tran’s resignation in early February.

“She’s fresh, she’s an educator and well-educated,” Board member Salvador Ramirez said in his motion to nominate Talamantes. “She seems to have a very good demeanor and be very positive.”

“I really believe in public education. As an educator myself, I’m very passionate about the education that our children receive,” the 38-year-old said. “I was very excited to be able to apply for this vacancy and to have the opportunity to contribute to the youth within my own community.”

Before becoming a teacher four years ago, Talamantes spent nine years reviewing contracts and payroll documents as an auditor in the Teamsters Union, she said.

The 14-year El Monte resident was selected out of a pool of nine candidates.

Maria-Elena will make a good Trustee.

My only regret in this whole affair is that she may not make many of those long 10-12 mile runs this spring/summer.

But, we will see!

Here is the video of Maria-Elena taking the oath of office: