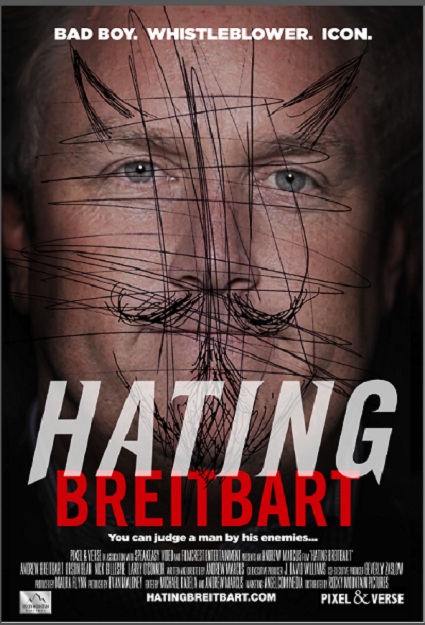 From the original press release:

Hating Breitbart, a feature-length documentary that takes an in-depth look at the final days of controversial New Media pioneer, Andrew Breitbart, who, before his untimely death earlier this year, became a conservative icon and one of the nation’s most influential political commentators; is set to hit theaters on October 12, 2012. Hating Breitbart will debut in exclusive engagements in Los Angeles, St. Louis, Dallas and Washington, D.C., with scheduled expansion to cities across the country in subsequent weeks.

But, as Ed Driscoll explains over at PJ Media, the release has been delayed – by a week.

The release of a documentary about deceased new-media provocateur Andrew Breitbart that was to open Friday has been delayed one week because of a rift between the filmmakers and the MPAA, which has rated the film R due to obscene language.

The movie, called Hating Breitbart, is largely about the subject’s battles against the mainstream media over the way it allegedly unfairly maligns the Tea Party movement. Clips of Anderson Cooper, Rachel Maddow, Keith Olbermann, Chris Matthews, Bill Maher, Janeane Garofalo and others who call conservatives “teabaggers,” “racists” and other disparaging terms are used throughout the film.

The movie originally contained several uses of the F-word, which was routinely hurled at Breitbart when he’d show up at liberal gatherings. Breitbart also uses the word a few times in the film.

Under current MPAA guidelines, if a film uses “one of the harsher sexually derived words” — such as the F-word — more than a certain number of times, it receives an R rating. But the MPAA sometimes has made inconsistent rulings over language.

The MPAA gave Hating Breitbart an R rating last week, much to the dismay of director Andrew Marcus and distributors Rocky Mountain Pictures, who were hoping for a PG-13 rating. Marcus then cut out the offending word nine times but left in some that he deemed important to the integrity of the film. The MPAA still rated the film R.

One of the major disagreements comes near the beginning of the film and also can be seen in the film’s online trailer, when Breitbart looks at the camera and says: “What the left has stood for with political correctness is to try and get those with whom they disagree to shut up. … You’re gonna call us racist? You’re gonna call us potential Timothy McVeighs? F— you.”

In any case, I have a scheduled interview with Andrew Marcus scheduled in a few hours and we can delve into this issue and the making of his documentary.

In the meantime, here is the movie trailer:

One thought on “Hating Breitbart – The Documentary in Select Theaters Soon”