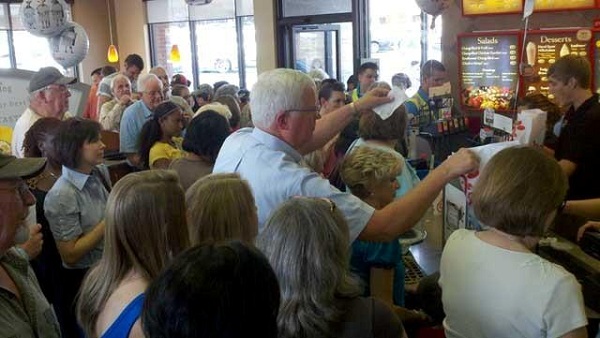 Looks like the Chick-Fil-A Appreciation Day has been successful.

An A/V follow-up on Rob’s post to give you a sense of how things are going. There’s no hard sales data yet, just anecdotal accounts of big crowds, but the photos are impressive. Twitchy has a nice gallery; this one, from Fox Atlanta, is local but also solid. And as for the lone CFA in the Chicago, Legal Insurrection’s got that covered. A reminder to Rahm and that dumb alderman who wanted Chick-fil-A banned from his ward: Gay-marriage opponents turn out. If you’re going to take them on and risk galvanizing them, at least avoid doing it via tactics that are obviously unconstitutional and therefore destined to fail. Good lord.

I don’t know if these Americans are supporting traditional marriage or are just revolted on how the free speech rights of the Chick-Fil-A President Dan Cathy were trounced by the same sex marriage supporting POLS.

In any case, Chick-Fil-A has come out alright in the flap and some folks even enjoyed a chicken sandwich.