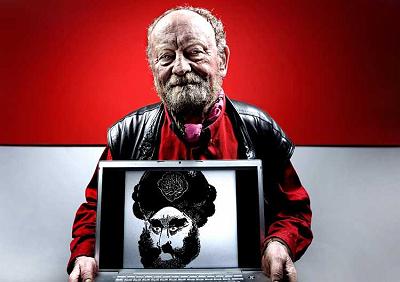 You remember the story about the axe-wielding Somali who busted into Westergarrd’s home.

Danish police intelligence said they believed the “attempted assassination … is terror related” and accused the man, who was not named, of having links with Somalia’s al-Shabaab militant group as well as al Qaeda militants.

The cartoonist, 74, pushed a panic button, fled to a safe room and was unhurt when police arrived. His grand-daughter was in the house during the attack. Police could not confirm reports he had tried to break down the safe room door with the axe.

Westergaard, who in 2005 depicted Prophet Mohammad with a bomb in his turban, has been under police protection since his caricatures of the Prophet led to death threats.

The Somali man appeared in court on a stretcher with a hand and leg in plaster casts due to gunshot wounds from a police officer who had narrowly dodged the axe thrown at him by the intruder who was trying to evade arrest, police said.

The accused did not speak in court, but denied the charges through his lawyer.

The Security and Intelligence Service PET, a department of the national police, said in a statement: “It is PET’s impression that the attempted assassination of the cartoonist Kurt Westergaard is terror related.”

The man, the PET said, “has close relations to the Somali terror organization al-Shabaab and al Qaeda leaders in East Africa, and he is also suspected of having been involved in terror-related activities during his stay in East Africa.”

It also accused him of involvement in a terror-related network with links to Denmark, where he has a residence permit.

Well, this week the 75 year old cartoonist will face the Somali terrorist who attempted to murder him on New Years Day in 2010 – a year ago.

Westergaard and his granddaughter were unharmed.

“I got away. But he’s the real victim, who is likely going to sit behind bars for quite a while and will have enough time to think through what happened,” Westergaard told AP this week about the intruder, a 29-year-old Somali man charged with terrorism and attempted murder.

The defendant, who cannot be named under a court order, denies the charges, his lawyer Niels Christian Straus said. He declined to say what his client was doing at Westergaard’s house, saying he’ll explain it as the trial begins at the city court in Aarhus, Denmark’s second largest city.

If convicted of terror, the defendant could face life in prison, although such sentences are generally reduced to 16 years under Danish law.

Westergaard’s security was ramped up even further after the break-in. Police temporarily moved him and his wife from their house in Aarhus. He’s now permanently escorted by earpiece-wearing bodyguards from PET, the Danish security service.

They are sure to accompany him to the court hearings, which are expected to draw large crowds. Westergaard is scheduled to testify on Thursday.

He said he was glad that the trial was finally getting started, so he could get on with his life, even though the infamous cartoon will forever be a part of it.

“The drawing will follow me into my retirement home and later to my tomb,” Westergaard said.

Here is the famous drawing: