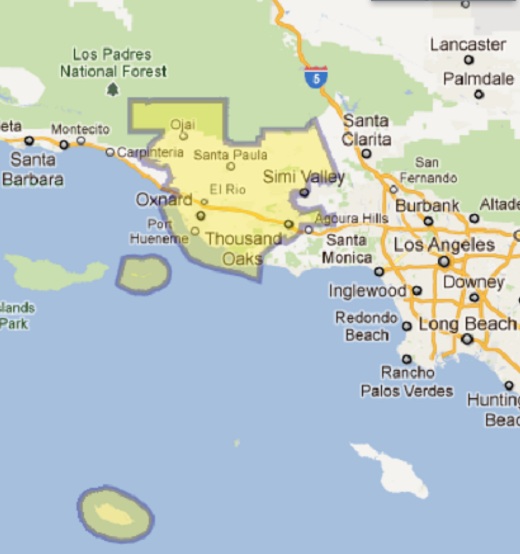 California Congressional District 26 Map from Around the Capitol


Timm Herdt of the Ventura County Star has the information.

In the latest developments in the fast-changing campaign for Ventura County’s new 26th Congressional District, the County Republican Central Committee has unanimously endorsed Sen. Tony Strickland of Moorpark, a Ron Paul supporter from Ojai announced he will be a candidate and one of five Democratic candidates has withdrawn from the race.

Akiva Werbalowsky, a permaculture designer from Ojai, became the third Republican to enter the race, saying he, like Paul in the presidential campaign, will advocate a libertarian conservative view.

“I consider myself similar to Barry Goldwater, who believed that personal liberty is the primary concern of a conservative,” he said Thursday.

And, Democrat Zeke Ruelas, a retired longshoreman and veterans’ advocate from Oxnard has apparently withdrawn his candidacy (the filing deadline is March 9) and will endorse Democrat Ventura County Supervisor Steve Bennett.

This leaves the race with Republicans Linda Parks and Tony Strickland.