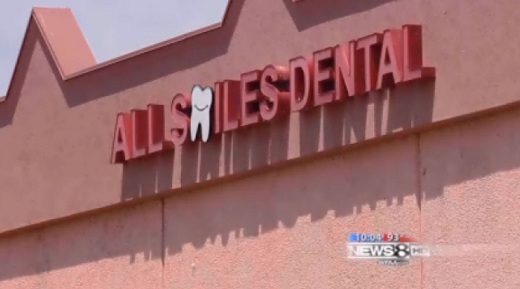 A Texas television station has been investigating fraud in the Texas Dental Medicaid Program for over a year. Their investigations have culminated in the Texas Attorney General filing suit against the dentists and corporate entities involved.

A year-long WFAA investigation into questionable Medicaid dental payments has resulted in the Texas Attorney General filing lawsuits this week.

Greg Abbott charges that a Dallas dentist and his corporate entities bilked taxpayers out of millions for fraudulent orthodontic work on poor families.

He and his former firm, All Smiles, declared bankruptcy following a series of reports detailing how he and other dentists around Texas gamed the welfare system by billing for unnecessary dental work.

WFAA found that over the past few years, Texas has paid out more in Medicaid orthodontic claims than all other 49 states combined.

All Smiles billed Medicaid for at least $15 million over two years, which is twice as much as the entire state of Illinois. The Attorney General’s lawsuits, filed in Austin Monday, seek to recoup “two times the amount of the overpayments.”

WFAA’s findings have spurred outrage among lawmakers and hearings in Austin and Washington D.C.Madelayne Castillo, a former All Smiles employee, and Dallas orthodontist Dr. Christine Ellis filed separate whistleblower lawsuits in April and May alleging fraud by Malouf and his corporations.

Both lawsuits remained sealed while the Attorney General’s office investigated the claims. On Monday, Abbott’s office joined those lawsuits by refiling them in the state’s name.

Here is the video report – embedded below:

Stay tuned as these cases move forward and the feds open fresh investigations into the dental Medicaid industry.

Certainly, this will NOT be good for the dentistry profession.

The fallout will be massive, I predict and may very well change how dental Medicaid patients are treated.