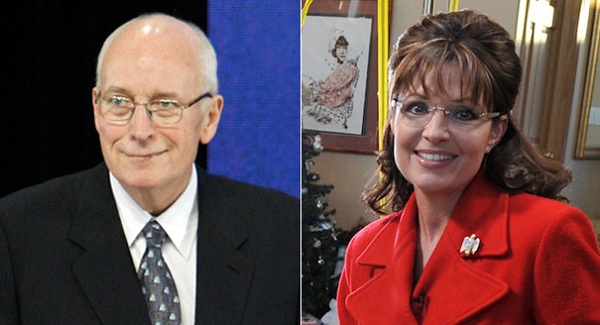 Dick Cheney said today that John McCain’s choice of Sarah Palin as his Vice Presidential nominee was a “mistake.”

Dick Cheney has some advice for Mitt Romney on choosing a running mate:  Don’t pick another Sarah Palin.

In his first interview since receiving a heart transplant in March, Cheney told ABC News, that John McCain’s decision to pick Palin as his running mate in 2008 was “a mistake” —  one that it is important from Romney not to repeat.

It’s subject on which Cheney has some unique experience.  He helped Presidents Gerald Ford and George W. Bush lead their vice presidential searches and, of course, served as vice president for eight years.  He’s also privately offered some advice to both Romney and Beth Myers, who is leading Romney’s search for a runningmate, on the process.

Cheney would not comment on what he told Romney and Myers, but he was harsh in his assessment of McCain’s decision to pick Palin.

“That one,” Cheney said, “I don’t think was well handled.”

“The test to get on that small list has to be, ‘Is this person capable of being president of the United States?’”

Well, Cheney never really thought Sarah Palin was qualified to be the Vice President. He just did not articulate it so bluntly earlier.

Asked in an interview on NBC broadcast Tuesday morning whether he thought she was qualified, Cheney ducked and said he’s “not going to get into the business … of saying this one is, this one isn’t.”

The former vice president said he would speak out at a later time on the 2012 contest.

“I’m interested in Gov. Palin like a lot of people are,” he said in an interview on the “Today” show.

“I’ve met her,” he said. “I thought she’s got an interesting political career established.”

Cheney wouldn’t weigh in on her chances in 2012 or whether she’d do a good job in the White House. “She’s clearly a factor in the Republican Party, has a strong following. She also has a lot of critics.”

It’s not the first time Cheney has avoided weighing in on whether he thinks Palin could be president.

The problem with the GOP in 2008 was not Sarah Palin, despite her shortcomings and lack of experience. It was not her blow-up with Katie Couric.

The problem and the mistake in 2008 was the Presidential nominee, John McCain. He simply was too old, too liberal and not aggressive enough in order to make the GOP case to the American people. The campaign he ran was abysmal.

Even though New York City Mayor Rudy Giuliani was more moderate on social issues than the GOP platform, he would have been the better nominee.

Here is the video embedded below of Cheney’s interview: