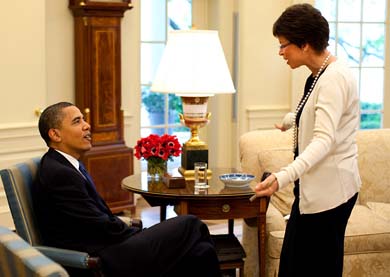 Doug Ross has the story and I note the Daily Caller link has now been hacked and associated with malware – making it an untrustworthy site.

At the urging of Valerie Jarrett, President Barack Obama canceled the operation to kill Osama bin Laden on three separate occasions before finally approving the May 2, 2011 Navy SEAL mission, according to an explosive new book scheduled for release August 21. The Daily Caller has seen a portion of the chapter in which the stunning revelation appears.

In ”Leading From Behind: The Reluctant President and the Advisors Who Decide for Him,“ Richard Miniter writes that Obama canceled the “kill” mission in January 2011, again in February, and a third time in March. Obama’s close adviser Valerie Jarrett persuaded him to hold off each time…

Miniter, a two-time New York Times best-selling author, cites an unnamed source with Joint Special Operations Command who had direct knowledge of the operation and its planning.

Obama administration officials also said after the raid that the president had delayed giving the order to kill the arch-terrorist the day before the operation was carried out, in what turned out to be his fourth moment of indecision. At the time, the White House blamed the delay on unfavorable weather conditions near bin Laden’s compound in Abbottabad, Pakistan.

Interesting that the Daily Caller has gone down with some sort of hacking.