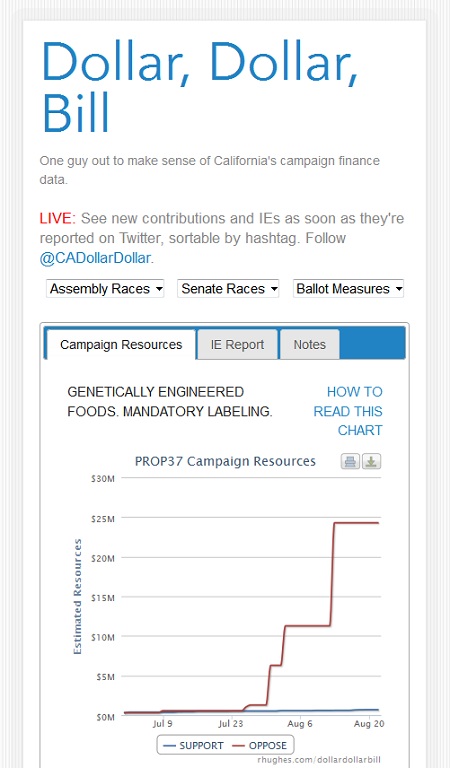 This is a fun website which is the brainchild of Democrat Speaker Perez’s staffer Ryan Hughes.

A new campaign finance web site is circulating the Capitol Twitterverse. Dollar, Dollar, Bill allows users to see in graphic format how contributions are stacking up in California political races. The site scans the Secretary of State’s database every 20 minutes and displays contributions to campaigns and IEs associated with legislative races and ballot measures.

The tool is the brainchild of Ryan Hughes, a staffer in the office of Assembly Speaker John A. Pérez. Hughes says Dollar, Dollar, Bill is nonpartisan. “This project is completely objective and without commentary,” he said in a statement announcing the site. “It’s designed to give everyone an intuitive look at how much money is being raised and spent in our elections.”

Go ahead and play with it.

There sure is a good deal of campaign cash being sloshed around California’s elections, no?

The Twitter feed is even more revealing – give it a try, too.

If that is not enough for the California political junkie, I have also been using Election Track which also has a Twitter feed @electiontrack for large, and last minute contributions.