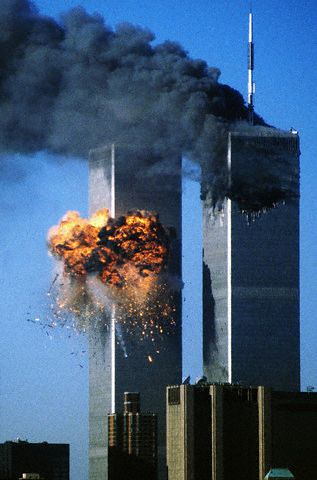 The World Trade Center south tower (L) burst into flames after being struck by hijacked United Airlines Flight 175 as the north tower burns following an earlier attack by a hijacked airliner in New York City in this September 11, 2001 photo.

Democratic and Republican calls mounted on Tuesday for U.S. congressional hearings into President George W. Bush’s assertion that he can order warrantless spying on Americans with suspected terrorist ties.

Vice President Dick Cheney predicted a backlash against critics of the administration’s anti-terrorism policies. He also dismissed charges that Bush overstepped his constitutional bounds when he implemented the recently disclosed eavesdropping shortly after the September 11 attacks.

Republican Sens. Chuck Hagel of Nebraska and Olympia Snowe of Maine joined Democratic Sens. Carl Levin of Michigan, Dianne Feinstein of California and Ron Wyden of Oregon in calling for a joint investigation by the Senate Intelligence and Judiciary Committees into whether the government eavesdropped “without appropriate legal authority.”

Senate Minority Leader Harry Reid, a Nevada Democrat, said he would prefer separate hearings by the Judiciary Committee, which has already promised one, and Intelligence Committee.

Flap still does not believe there will be public Senate hearings so this announcement is nothing but BLUSTER. This is a classified project and the leaders of the Senate Intelligence Committee who have the “need to know” have already been briefed and have access to the SECRET details in secure facilities.

If these Senators, particularly the Republican ones have a question of “appropriate legal authority” why do they not have their staffs draft and file a lawsuit enjoining the President.

Flap would be very interested in how, ultimately, the United States Supreme Court fails to challenge the President’s Constitutional authority to protect America from foreign attacks and subversion.

So, how about it, Senators?