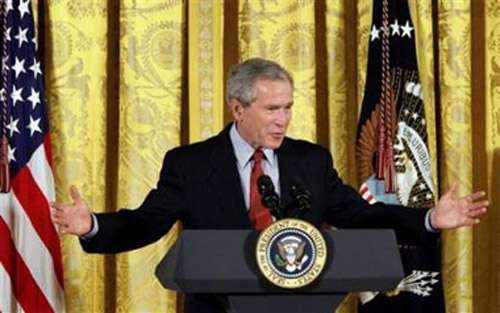 President Bush makes remarks at the Celebration of Asian Pacific American Heritage Month and Presentation of the President’s Volunteer Service Awards in the East Room of the White House in Washington Friday, May 12, 2006.

President Bush defended the scope of the government’s domestic surveillance programs that have riled privacy advocates and threatened to impede the Senate confirmation of Bush’s new pick to lead the CIA.

“The privacy of all Americans is fiercely protected in all our activities,” Bush said Saturday in his weekly radio address. “The government does not listen to domestic phone calls without court approval. We are not trolling through the personal lives of millions of innocent Americans.”

Without specifically confirming the database effort, Bush defended the intelligence activities he has authorized, saying they are focused on al-Qaida terrorists and their affiliates. He reiterated that they are lawful and that appropriate members of Congress, both Republican and Democrat, have been briefed on the surveillance activities.

“Americans expect their government to do everything in its power under our laws and Constitution to protect them and their civil liberties,” Bush said. “That is exactly what we are doing. And so far, we have been successful in preventing another attack on our soil.”

Flap has NO concerns of his civil liberties being violated and appreciate the government protecting him and his family from terrorist activity.

John Hinderaker over at Power Line has the statuatory language authorizing the telephone data mining.

And, yes, here is a controlling court case:

The telephone company, at police request, installed at its central offices a pen register to record the numbers dialed from the telephone at petitioner’s home.
Held: The installation and use of the pen register was not a “search” within the meaning of the Fourth Amendment, and hence no warrant was required. Pp. 739-746.

This is an old story, covered in the New York Times coverage in December 2005 and simply a media attempt to discredit President Bush and derail Michael Hayden’s confirmation as CIA Director.

What will be the fall-out?

The lawsuit filed against Verizon Communications will go nowhere.

America will be safer…..

Discuss this blog post and MOREâ€¦. at the FullosseousFlapâ€™s Dental Blogs, My Dental Forum.
Previous:

Global War on Terror Watch: Why the NSA Monitors Communications of Al-Qaida