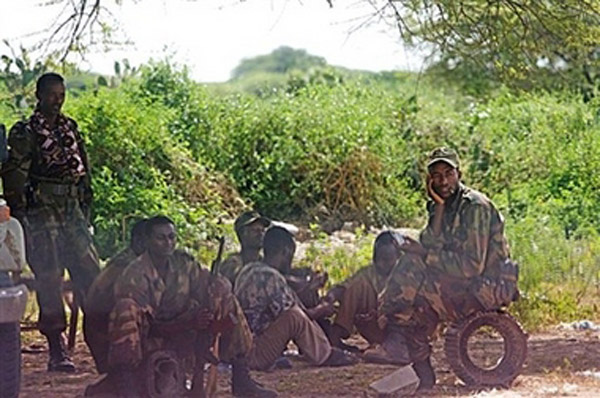 Ethiopian soldiers wait along side a road in northern Mogadishu, Somalia on Sunday Dec. 31, 2006. Somali government troops backed by Ethiopian tanks and MiG fighter jets have captured the last major stronghold of a militant Islamic movement, Somalia’s Prime Minister Ali Mohamed Gedi said Monday, Jan. 1, 2007. Islamic fighters, many of them Arabs and South Asians, were fleeing in heavily armed trucks toward the Kenyan border, 160 kilometers (100 miles) to the south after a 13-day onslaught led by the Ethiopian army.

A militant Islamist movement fled from rapidly advancing government forces into a rugged, forested corner of Somalia, as the prime minister offered the Islamist rank and file amnesty if they surrendered.

Diplomats from the region were working to arrange the speedy deployment of African peacekeepers to help the interim government establish its authority in the country, which has known only anarchy for 15 years.

As the last remaining stronghold of the Islamic group was overrun by government troops backed by Ethiopian tanks and MiG fighter jets, the net began closing on suspected al-Qaeda fighters believed to be sheltered by the hardline group.

Neighboring Kenya vowed to seal its frontier to prevent any extremists, now wedged against the sea and their border, from escaping the 13-day military offensive.

Sea routes from southern Somalia were also being patrolled by the U.S. navy, hunting three al-Qaeda suspects believed to be among the Islamic group and wanted for the 1998 bombings of U.S. embassies in East Africa.

“Kenya cannot be a haven for people who are not wanted by their lawful government,” Kenyan government spokesman Alfred Matua said in a statement on Monday.

The military advance marks a stunning turnaround for Somalia’s government, which just weeks ago could barely control one town — its base of Baidoa — while the Council of Islamic Courts controlled the capital and much of southern Somalia.

What a dramatic turn around in Somalia. One day radical Islamists are running the country and exporting terrorists and the next they are killled and out of power.

Ethiopia knows better than to let a cancer grow.

Somalia’s Prime Minister Ali Mohamed Gedi attends a meeting with members of Somalia’s divided parliament in Mogadishu December 31, 2006. Somali Islamists fled overnight from their final stronghold round the southern port of Kismayu in what could be the end of a nearly two-week war with the Ethiopian-backed government, residents said on Monday.

In a bid to cement its control, Prime Minister Ali Mohamed Gedi ordered a countrywide disarmament that comes into effect Tuesday, an immense task in Somalia, which is awash with weapons after more than a decade of civil war.

“The warlord era in Somalia is now over,” Gedi said at a news conference in the recently captured capital, giving a three-day deadline for the handing over of all weapons. Somali warlords, who have begun returning to Mogadishu after the Islamists defeat, have not yet voiced agreement.

And Prime Minister Gedi has promised to turn over Al Qaeda terrorists wanted by the United States.

Somalia’s interim government and its Ethiopian allies have long accused Islamic militias of harboring al-Qaeda, and the U.S. government has said the 1998 bombers have become leaders in the Islamic movement in Africa.

“If we capture them alive we will hand them over to the United States,” Gedi said.

But in a recorded message posted on the Internet on Saturday, deputy al-Qaeda leader Ayman al-Zawahri called on Somalia’s Muslims and other Muslims worldwide to continue the fight against “infidels and crusaders.”

Looks like a MAJOR battle in the global war on terror has been won.

Time for rebuilding Somalia and an African Union peacekeeping force to prevent the radical Islamists from returning.

Somalia Watch: A Guide to the Latest Front of the War on Terror