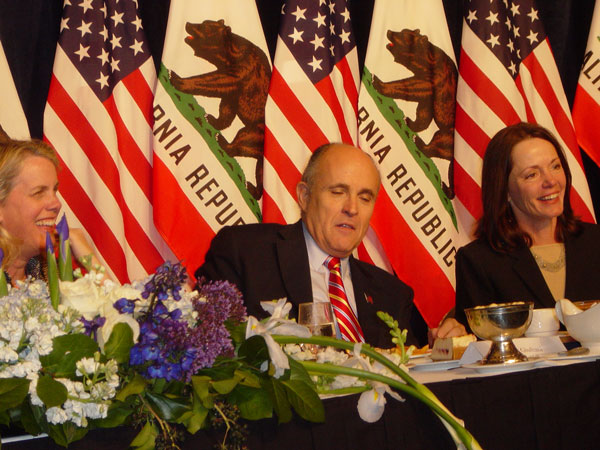 America’s Mayor Rudy Giuliani prior to his luncheon speech at the California GOP in Sacramento, February 10.
Before a packed and enthusiastic California Republican Party Convention throng, Rudy Giuliani announced today that he will seek the Presidency.

During the speech, Hizzoner touched on a number of themes and issues without formally saying “I am formally announcing today I will seek the Presidency.”

However, in the Press Gaggle after the speech, the Mayor when asked by Gina Garcia, Capitol Correspondent for Fox 11 News, Los Angeles, when he would formally announce, he replied, “I thought I just did.”

Flap has video footage and photos that he will process, provision and get up to the net as soon as possible.
Rudy Giuliani IS IN!
The Video:

When asked a follow-up question about when he would make a formal announcement, he responded, “Well, formally announce? I don’t know. If you go back to my speech, I think I may have. I’m not sure…..”

Update:
The New York Times almost has it right but they are not reporting some important facts.

2. Friday evening, Giuliani spoke before the California GOP Assembly Caucus and asked AND received the endorsement of between 14 and 16 Assembly members, including Assemblyman Ted Gaines.

And all of this for someone who is being COY or EVASIVE about running?

Giuliani announced today.  He filed his statement of candidacy earlier in the week.

Facetiously he asked the Press if he has to repeat this announcement to get more attention.

Rudy has the attention of America.

Robert Salladay over at the Los Angeles Times has a better take on Giuliani’s intention (“Yes, I am Committed”) although he fails to mention which “Conservative” Assembly members were disappointed with Rudyon friday night.  And he fails to mention Giuliani received multiple pledges of support and endorsements. 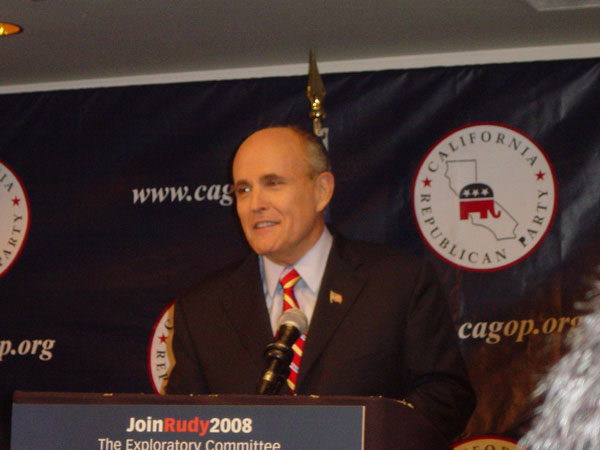 Hizzoner at the Press Room Gaggle where he was asked when he would formally announce for the Presidency. His reply: “I think I may have…..”

Stay tuned for more video and photos later on Sunday…..

One thought on “Rudy Giuliani Watch: Rudy Announces for President”