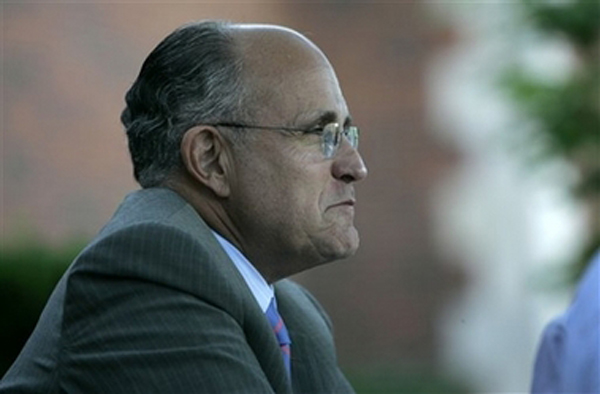 Former New York City Mayor Rudy Giuliani has to share his spot atop the field of Republican Presidential hopefuls this week. The newest face in the race, former Tennessee Senator Fred Thompson, is now tied with Giuliani. The latest Rasmussen Reports national telephone survey finds each man earning support from 24% of likely Republican Primary voters. A week ago, Giuliani had a six percentage point lead over Thompson, 23% to 17%.

It is not unusual for a candidate to gain ground in the polls when they first announce their intentions. However, Thompsonâ€™s rise has been meteoric. It remains to be seen whether the reality of his candidacy can measure up to its allure as an alternative for those dissatisfied with the other candidates in the field. At the moment, 59% of Republicans have a favorable opinion of their newest candidate. Just 14% hold an unfavorable opinion of Thompson while 27% are not sure.

Rudy edges down a notch and Fred Thompson gets a “BUMP” up from his announcement. The REAL story is the free fall of McCain and Romney.

Flap predicted that when Thompson bumepd up after committing to the Presidential race that it would put a stake in the heart of Romney. This is what has happened.

So, is this now a two man race?

Romney has the money to stay through Florida and/or Super Duper Tuesday.Â  Both his campaign should be on “death watch.”
Three candidates move into the 2008 elections. McCain will withdraw after Labor Day.