An imminent terrorist plot against the Danish newspaper Jyllands-Posten who published the infamous Muhammed Cartoons was foiled today.

The Danish intelligence agency said Wednesday that it had arrested five men suspected of an “imminent” terror plot against the Danish newspaper that ran controversial cartoons of the Prophet Muhammad in 2005.

The arrests come only a couple weeks after central Stockholm was rocked by two explosions that Swedish police have deemed a terror attack. The plots in the two Scandinavian countries are unusual because the region has been largely removed, until now, from the terrorism concerns that grip much of Western Europe.

Three of the men linked to the plot in Denmark are Swedish citizens and one of the five men arrested was arrested in Sweden, the New York Times reported. The men are not connected with the attack in Sweden, in which only the bomber was killed.

he men arrested in Denmark are a 44-year-old Tunisian, a 29-year-old Swede born in Lebanon, a 30-year-old Swede, and a 26-year-old Iraqi asylum seeker. The man arrested in Sweden was a 37-year-old Swede with Tunisian roots, Agence France-Presse reported. The Copenhagen Daily reports that the arrests stem from collaboration between Danish intelligence and Swedish law enforcement in a long-term surveillance operation.

The cartoons, published in 2005 in the Danish daily Jyllands-Posten, featured caricatures of the Prophet, which are considered blasphemous by most Muslims and prompted anger and violent rioting in some Muslim countries.

The men planned to kill as many as possible in the building housing the newspaper, the Copenhagen Daily reports.

The New York Times account of the “Mumbai-style” attack is here.

This is not the first time the newspaper or Kurt Westergaard, the cartoonist who drew the Muhammed Cartoons.  Remember the Somali who was linked to Radical Islamic al-Shabab and al Qaeda who tried to assassinate Westergaard with an axe?

And, the attack in Sweden may have been linked to another controversial caartoon.

…the e-mail threat connected to the attack references Lars Vilks, a Swedish cartoonist who drew caricatures of the Prophet Muhammad as a dog in 2007 in the Swedish newspaper Tidningarnas Telegrambyra, the Monitor reported.

“Now, your children — daughters and sisters — will die like our brothers and sisters and children die,” the recording said, according to the Times. “Our actions will speak for themselves. As long as you do not end your war against Islam and the insult against the prophet and your stupid support for that pig Vilks.”

Of course, there was security in the building just as Westergaard had a “panic room” installed in his residence.

The Jyllands-Posten building was already under high security before the arrests, said Lars Munch, the director of the newspaper’s corporate owner, on the newspaper’s Web site. He called the plot “appalling” and said the newspaper was cooperating with Danish police in their investigation.

Prime Minister Loekke Rasmussen of Denmark told reporters that he was “shocked” by the attack.

“Regardless of today’s event, it remains my conviction that terrorism must not lead us to change our open society and our values, especially democracy and free speech,” he said.

And, here are the cartoons that have created this “EXCUSE” for terrorist activities. 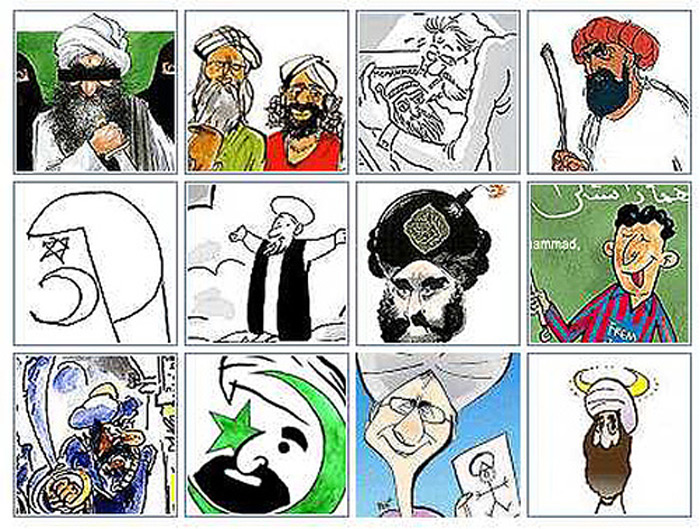