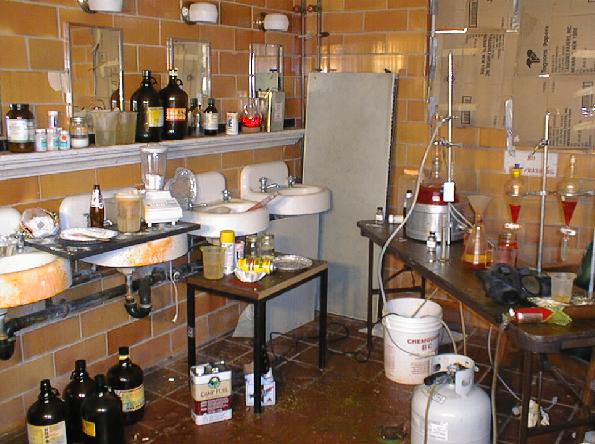 Good for the businesses, but I would really like to put them into another line of work.

Methamphetamine labs are more than just dangerous and illegal. They leave a mess — an environmental hazard that, according to Indiana law, must be cleaned up.

And it takes a special process, certification and inspectors who scour the property in full-gear Hazmat suits and respirators to do the dirty work.

Welcome to the world of meth lab cleanup companies, a growing and profitable business.

Indiana, which ranks in the top five for meth production, has 22 companies certified by the Indiana Department of Environmental Management to decontaminate properties.

And business is, um, booming.

“It’s such a growing epidemic,” said Donetta Held, CEO of Crisis Cleaning, a Bloomfield, Ind., company. “It’s everywhere — from a high-dollar house in downtown Indianapolis to these rural counties.”

Held’s company has already done 25 meth cleanups this year, in less than three months. That’s already half as many as the company completed last year.

“Some people say there is not as much meth or meth has gone down,” Held said. “Um, no. I don’t see that at all.”

That has meant lots of revenue for meth cleanup companies. Most companies charge about $2 to $3 per square foot to do a cleanup. Depending on the size of the property and how many rooms need to be decontaminated, the cost can range from $5,000 to $10,000.

And, now, who is saying that the states should not require a prescription for pseudoephedrine?

Well, it is the drug company that makes allergy and cold pills that contain the meth precursor chemicals. They are afraid of reduced sales.

Most of these labs would go away with NO precursor chemicals with which to make methamphetamine. So, why the delay?

A solution is easy – limit the precursor chemicals and secure the Mexican border from the drug cartels.