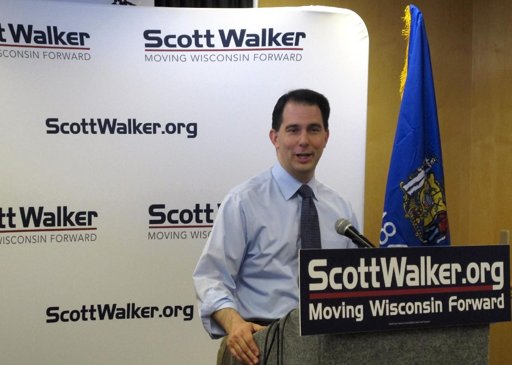 Wisconsin Gov. Scott Walker speaks during a news conference at the Wisconsin Republican Party convention in Green Bay, Wis., on Friday, May 11, 2012

According to the latest We Ask America Poll.

While other polls also show Walker in the lead, no one is suggesting that this race is anywhere near over. Walker only leads among self-described Independent voters by 47.6%-44.6%, and the underlying numbers seem fluid. Still, some of Walker’s detractors have been vocal about the fact that Walker was duly elected in 2010 and in most states would not be able to be challenged with a recall without greater cause. And a whopping 95% of those called said they plan to vote in the June 5th election which will have the national spotlight on it.

For now, that light is shining a bit brighter on Scott Walker.

And, Wisconsin Democrats are grumbling that the national party is not spending big.

The national party may very well know that Walker is going to successfully defend his office and that campaign resources can be better spent elsewhere.