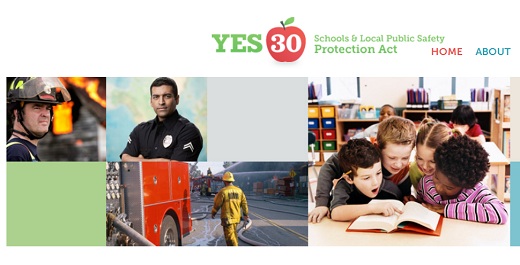 This is California Governor Jerry Brown’s pet initiative and he is calling in all of the special interests, business and labor to support his tax increase proposal.

But, Californians should be aware that although this targets high-income taxpayers, the majority of the money raised for the State of California to spend or squander comes from the sales tax increase.

Here are the details of the tax initiative.

Estimated revenue from Proposition 30 vary from Jerry Brown’s $9 billion estimate to the $6.8 billion estimated by the non-partisan Legislative Analysts Office (LAO).[9]. The difference stem for the volatility caused by capital gains income from high-income earners, an issue in California’s tax system previously identified by the Legislative Analysts Office (LAO).[10]

And look at who is contributing. Capitol Weekly has a story.

And, Ballotpedia has a chart.

Let the television commercials fly on this tax the rich, I mean tax everybody, tax scheme, because the Democrats who dominate the California Legislature cannot practice fiscal restraint.

I bet this initiative will pass and everyone this next year will be sending more of their hard-earned income to a state government which spends without end.