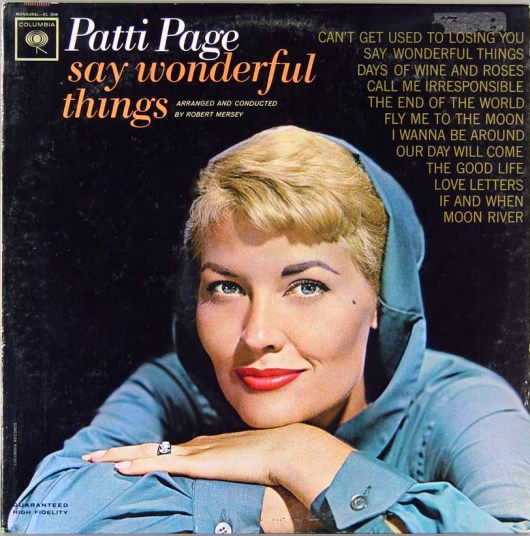 I remember listening to Patti Page’s music – like forever.

Patti Page, who made “Tennessee Waltz” the third best-selling recording ever, has died. She was 85.

Page died on New Year’s Day in Encinitas, Calif., according to her manager.

She was the top-selling female singer in history with more than 100 million record sales, created a distinctive sound for the music industry in 1947 by overdubbing her own voice when she didn’t have enough money to hire backup singers for the single, “Confess.”

Her career included 15 gold records and three gold albums of more than 1 million in sales. She had 24 records in the top 10, including four that reached No. 1. She was also the first singer to have television programs on all three major networks, including “The Patti Page Show” on ABC.

I remember at the Hollywood Bowl many years ago her placing both hands on my round face and singing to me.

I will never forget.

Patti will be missed.