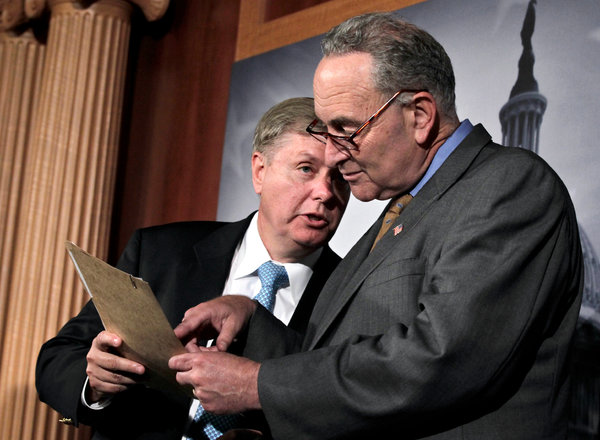 As if the above photo of Lindsey Graham-nesty and Chuckles Schumer are not foreboding enough. But, seriously, much has been written the past 24 hours since the Gang of Eight Senators announced a framework for immigration reform.

The framework is published here.

Go ahead and read it.

What are my thoughts?

I don’t think much of the framework, if enacted into law will be a disaster for the country, and the GOP. With the President weighing into the fray with a speech today in Las Vegas, there will probably be more objections.

You can read much about the problems of the plan (note: legislation has not been written as of this post) from a number of sources.

First, the initial thoughts of John Hinderaker at Powerline.

1) The proposal begins with the oft-repeated claim that “our immigration system is broken.” But what does this mean? I think our immigration system is fundamentally misguided because it does not serve our interests. We should be recruiting highly-skilled people to come here from around the world, not unskilled people from, e.g., Somalia, who are recruited, in effect, because they are related to someone who is already here. Which, of course, is how that person got here, too. The present system is perverse. But the reorientation of our legal immigration system to emphasize skilled over unskilled labor has nothing to do with the issue of illegal immigrants who are currently here. What reason is there to link the two?

2) Countless politicians and commentators have said today that the presence of 11 million illegals in America is intolerable and we urgently need to do something about their status. But why? We have had millions of illegal residents in the U.S. for a long time. Why is it urgently necessary to do something now?

3) How is the current proposal different from the “comprehensive immigration reform” plans that we have seen through the years? In essence, it provides a “path to citizenship” for something like 11 million illegals in exchange for promises of future law enforcement–the same promises that have been made and broken in the past. See Mickey Kaus on this. Moreover, the Obama administration is now actively subverting our immigration laws, by, for example, recruiting illegals into the food stamp program. Why would anyone expect Obama to enforce future immigration laws any better than he is enforcing the ones we have now?

Heather Mac Donald over at National Review has a good summary of the proposal.

Mickey Kaus and Mark Krikorian have already acutely analyzed the new Gang of Eight’s “comprehensive immigration-reform” proposal; I will simply embroider on their observations. As Kaus has pointed out, the proposal is tantamount to an immediate, unconditional amnesty, and thus will lead to the same moral hazard — attracting further illegal immigration — as every previous amnesty in the U.S. and Europe. Nothing of consequence to an intending illegal alien distinguishes the “probationary status” that will be granted upon payment of a fine and back taxes from full-fledged legal status. It is of no import that a probationer will not be immediately eligible to vote. After the 1986 amnesty, very few newly legal Hispanics sought to become American citizens. Only Proposition 187 spurred a slight uptick in that direction.

No intending illegal alien is going to be deterred from trying to enter by learning that the only thing that stands between him and legal status is paying a fine and taxes. Kaus’s point here is critical: Far from making illegal aliens go to the “back of the line,” this proposal gives them the immeasurable advantage of legal presence in the U.S. while waiting for their green card, unlike aliens obeying the law and waiting in their own country for permission to enter.

Political demographics drives the narrative – Democrats want more Hispanic voters and the Republicans THINK they can capture some – enough to win a Presidential election.

This is a poor way to set public policy.

I will write more later…..