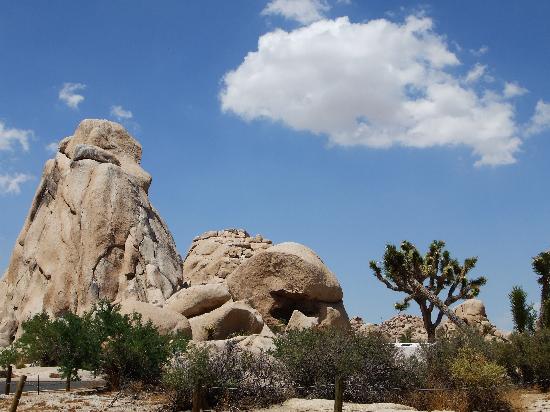 Well, California has a “balanced” budget, albeit a Democrat majority vote one and questionably balanced. It will be within the purview of California State Controller John Chiang to decide whether the passed budget legislation is indeed balanced or he is empowered by California law to ding (meaning withhold) the paychecks of California Legislators.

California Governor Jerry Brown continues (supposedly) to negotiate with the Republicans in order to schedule a tax election or pass tax extensions to make budget revenues easier for him and the majority Democrats. No deal so far.

Brown who can either sign, allow it to become law or veto the budget has scheduled a High Noon 12 PM PDT news conference and we will all learn more then – if it doesn’t leak out before = likely. Brown has 12 days to take or not take action.

So, on to the links.


Democratic lawmakers passed a rare on-time state budget Wednesday over Republican objections, but the plan — balanced with a blend of taxes, cuts and clever accounting — faces an uncertain fate at the hands of Gov. Jerry Brown.

After warning for months that devastating cutbacks to schools and public safety would occur without the renewed taxes that Brown has sought but has been unable to sell to Republicans, Democrats averted the most severe reductions.

But they did so by returning to old strategies that have papered over California’s deficits for years: delaying the payment of billions in bills, skipping debt repayments and penciling in money that may not materialize.

Using their new authority to pass a budget on a majority vote — and under threat of lost pay if a spending plan was not approved by Wednesday — the Democrats pushed through provisions to hike car registration fees and local sales tax rates and force online retailers, such as Amazon.com, to collect sales tax.

The plan would also cut more deeply into higher education, the courts and local law enforcement.

“It is not perfect. It is Plan B,” said Senate President Pro Tem Darrell Steinberg (D-Sacramento), who nonetheless called the package “worthy of the governor’s signature.”

Democrats said they hoped Brown would continue to negotiate with Republicans for the taxes he wants, to make some of their cutbacks unnecessary. But their blueprint puts Brown in a political pickle. It asks him to break two pledges central to his campaign for governor: no new taxes without voter approval and no more smoke-and-mirrors budgeting.

Brown has not said whether he will sign the document; he has 12 days to decide.

Fight Breaks Out on California Assembly Floor During Budget Debate

The two members jawed angrily in each other’s faces before Furutani, D-Gardena, appeared to give Wagner a shove, prompting several colleagues to separate them in the final minutes of the day’s budget session.

The dispute brought the house to a standstill for a couple of minutes during debate over a controversial redevelopment plan.

The two-bill proposal compels redevelopment agencies to backfill state coffers and give money to local governments under threat of elimination. Wagner, R-Irvine, testified that it was comparable to a shakedown scheme and referred to the popular HBO show, “The Sopranos.”

That prompted Assemblyman Anthony Portantino, D-La Cañada Flintridge, to demand an apology for the Sopranos reference “as a proud Italian American.”

Wagner retorted that he’d “apologize to any Italian Americans who are not in the Mafia and engaged in insurance scams,” setting off a murmur among lawmakers.

Minutes later, Furutani and Wagner were in each other’s faces and had to be broken up by three other lawmakers. The back of the Assembly chamber was soon flooded with legislative aides who came to see the commotion.

Democrats’ budget bills at a glance

Here are some of the key provisions of the latest bills:

— $12 annual fee on car registrations to pay for Department of Motor Vehicle services. The department’s costs previously were covered by a voter-approved increase in the vehicle license fee increase that expires July 1.

— $150 annual fee on homes in rural areas that depend on the California Department of Forestry and Fire Protection for wildfire protection.

— A quarter-cent local sales tax. A 1 percent increase in the state sales tax is scheduled to expire June 30, so consumers would see a net reduction of three-quarters of a cent in the sales tax they pay on goods.


Most California voters see a court order to reduce the state’s prison population by 30,000 inmates as a serious problem, and nearly three out of four say it is time to revamp the state’s “three-strikes” law, a Field Poll out today finds.

The poll comes on the heels of last month’s ruling by the U.S. Supreme Court ordering California to address its prison overcrowding problem, and 79 percent of those surveyed said the matter is serious.

But there were not similar margins of support for Gov. Jerry Brown’s plans to transfer lower-risk inmates from prisons to county jails.

The poll found 51 percent of voters support the plan, with 37 percent saying it is a bad idea. Yet less than a majority of voters would support an extension of temporary tax increases to pay for it, the poll found.

The most significant finding came when voters were asked whether the state’s three-strikes law, which passed in 1994, should be modified to allow judges and juries more discretion when sentencing a criminal for a third felony.

The poll found 74 percent of voters would support allowing that discretion to ease prison overcrowding, with 24 percent opposed. 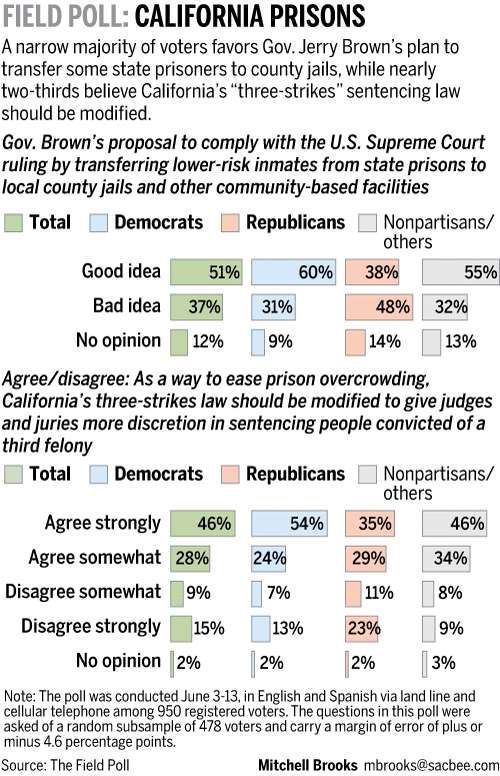