“I’m incredibly pleased and honored to have the support of the State’s oldest and largest Republican volunteer organization,” said Ramirez.  “The endorsement of the CRA demonstrates that our message is resonating with Republicans across the State.  We simply cannot afford more of the same socialistic policies of Feinstein and Obama.  It’s time to restore the American Dream in California.”

The CRA endorsement is one of the most coveted in all of Republican politics.  Ronald Reagan even referred to the CRA as “The conscience of the Republican Party.”

Candidates seeking the CRA endorsement went through a rigorous vetting process which included giving speeches to the entire delegation and facing a session of tough questioning in front of a “Fact Finding Committee.”  In order to receive an endorsement, a candidate must be supported by two-thirds of the voting delegates.

Ramirez was endorsed overwhelmingly by a vote of the entire CRA delegation late Sunday morning.

This endorsement has to deliver a decided edge to Ramirez, especially with so many candidates in the race vying to run against the front-runner and incumbent Senator Dianne Feinstein.

Millions of dollars were embezzled from her campaign. Twenty-two challengers are trying to knock her off in the June primary. And the stakes in the November election are nothing less than control of Capitol Hill.

But U.S. Sen. Dianne Feinstein isn’t a bit worried. Her campaign is on cruise control, her re-election all but certain — yet again.

After holding elected office for all but five of the last 42 years, Feinstein is the doyenne of California Democrats. She’s so politically bulletproof that no A-list candidates are wasting their time and money trying to dethrone her.

At 78, Feinstein has become the rare lawmaker who plays to her own political base while not overly riling her opponents. “She should have her easiest re-election ever,” said Gary Jacobson, a UC San Diego political science professor.

Feinstein, who won her last two elections in landslides, attributes her success to her work ethic and her ability to get along with fellow Washington politicians during venomous times. “I am known for working hard, and I can tell you if I wasn’t, I would have some major opposition,” Feinstein said in an interview last week.

Just how little she has to worry about was shown in a recent Survey USA poll. It found 51 percent of California’s likely voters intend to vote for Feinstein, while Republicans Elizabeth Emken of Danville and Dan Hughes of Oceanside were backed by 2 percent each. All other candidates clocked in at either 1 percent or zero.

But, will this endorsement be enough for Ramirez to come in second place above Elizbeth Emken and Dan Hughes? 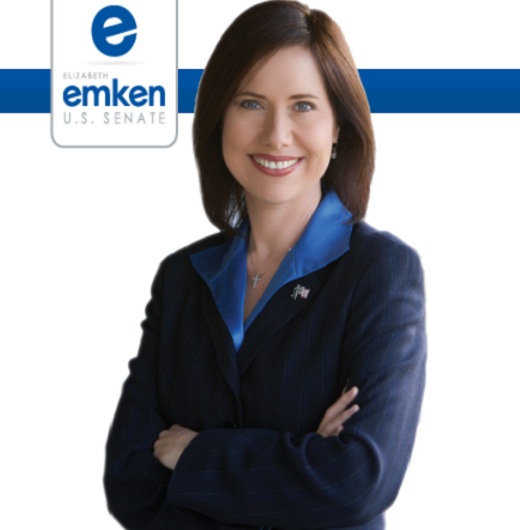