Congressional Candidate Dr. Lee Rogers won an auction for lunch with Representative Howard “Buck” McKeon at the College of the Canyons Silver Spur Celebration Saturday night. The auction took place in the Ronald Reagan Presidential Library in Simi Valley. Rogers paid $300 to the College for the lunch donated by McKeon.

“The money goes to the College Foundation, which is a good cause,” said Rogers. “I would like to sit with the Congressman and have a cordial discussion about the challenges that face the communities in the 25th district and the United States.”

The donation offers lunch in Santa Clarita or Washington, DC for the winner and up to three guests. Rogers intends on inviting three members of the local press to observe the lunchtime conversation. Invitations will be extended to The Antelope Valley Press, The Signal, and The Simi Valley Acorn. “There are many serious problems facing the district and it will be good to compare and contrast our views on policy,” Rogers said.

Rogers will reach out to Congressman McKeon this week to set up a date for the “lunch summit.”

I guess there was a problem in scheduling or whatever.

But, never fear another opponent of Rep. Buck McKeon, Republican Dante Acosta has agreed to stand in and take Buck’s place.

Dr. Rogers won an auction for lunch donated by Rep. Howard “Buck” McKeon at a charity fundraiser to support College of the Canyons, an important local educational institution.

After reading web postings that Dr. Rogers was unable to schedule a date after numerous attempts, Mr. Acosta reached out to Dr. Rogers.

“I know from firsthand experience the difficulty in obtaining a meeting with Congressman McKeon and the how frustrating it can be dealing with his office, so I decided to offer to have lunch with Dr. Rogers myself and he has agreed,” Acosta said. “I also told Dr. Rogers to invite any members of the media he wishes, I’m not afraid to speak in front of the press.”

“It is so important for a representative to be willing to listen to and engage with the community. It is part of their job to work with ALL members of the community, Democrat or Republican to get things done. I have very strong principles and will no doubt have differences with Dr. Rogers but if you are not willing to listen and discuss issues how will you know what you do agree on? I look forward to being able to discuss the important local issues like stopping the Cemex mega-mine and bringing more jobs to the district as well as federal issues such as the war in Afghanistan and the national debt.” Mr. Acosta added.

Mr. Acosta and Dr. Rogers agreed to hold their “Lunch Summit” on March 27th in Santa Clarita and will invite the press to dine with them.

You would think that Rep Buck McKeon who delivered a speech this morning at the Reagan Presidential Library would have agreed to his luncheon obligation today.

I mean, after all, it is for charity. 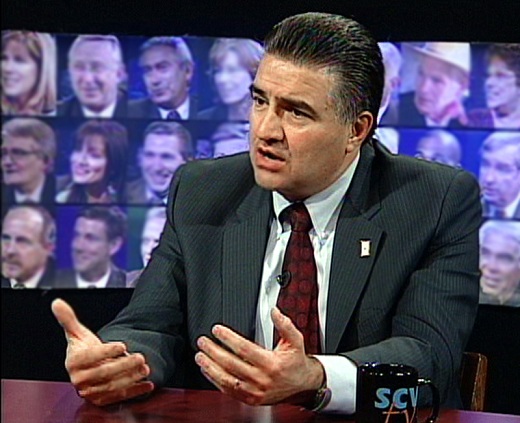 
Gold Star Father, financial advisor, and pro-military advocate Dante Acosta has officially filed as a candidate for California’s 25th Congressional District. The 25th Congressional District covers Santa Clarita, Simi Valley, the Antelope Valley, and Porter Ranch. Mr. Acosta is an active member in his community. Since the death of his son, U.S. Army SPC Rudy Acosta, one year ago Mr. Acosta has been an outspoken advocate for our military’s force protection protocols.

“We are facing unprecedented economic challenges and global pressures that threaten our security and way of life,” Acosta says. “However, I strongly believe the American dream is still alive.”

As a strong conservative and principled leader, Mr. Acosta believes in a common sense government. “I believe in a strong military, helping small businesses create more jobs, and ensuring a bright economic future. As a leader my moral compass dictates the highest ethical behavior and standards for this office.”

“I am running because I want to see the 25th to be adequately represented. Having to deal, first hand, with the lack of leadership in this district has motivated me to pick up the torch and run this race. I want to be sure the great people of this district have a strong representative who listens to, communicates with, and cares about them.”

Dante Acosta is a long time resident of the Santa Clarita Valley. He is a senior financial advisor, a Gold Star father, and advocate for our military. He currently lives in Canyon Country with his wife of 26 years, Carolyn, and his two children.

Filing deadline closes in an hour and let’s see if anyone else files.