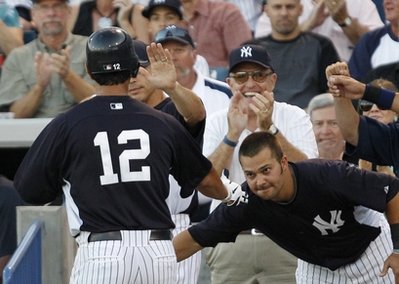 According to the latest Harris Poll:


Taking the same list of 11 potential Republican nominees and pitting them against President Obama shows some interesting results. While he only garners 8% of overall adults and just 7% of Republicans in the primary field, Rudy Giuliani is the only candidate on the list who edges out President Obama in a head to head match-up, 51% to 49%. The next two Republicans make it a close race but President Obama edges out Mitt Romney (51% to 49%) and Mike Huckabee (52% to 48%).

One problem – look at the photo above and tell me where America’s Mayor would rather be?

No, Rudy Giuliani will NOT be a candidate for President in 2012 although he would be a great general election candidate. He would give President Obama a run for his money.

Interesting too is the fact that Mitt Romney is so thin-skinned that he has one of his minions writing how horribly Rudy ran his campaign in 2008.


Candidates who do best in New Hampshire are those who campaign in the traditional way, making themselves available to primary voters at party events, town hall meetings and house parties. That’s what Romney did, and how he earned a second chance. Newcomers Tim Pawlenty and Rick Santorum have already spent more time campaigning among the grassroots than Giuliani did.

Most of us know the experience of having had a bad first date. Usually both participants recognize it didn’t work out, but sometimes the guy doesn’t get the message, calls again, and needs to be told bluntly: Sorry, Rudy. You had your chance, and much as we respect your resume, we’re just not interested in going out again.

I guess, Rudy travels to New Hampshire, threatens Romney, polls well and then the knives come out.

Gee, maybe Rudy should reconsider running – just to piss off Mitt Romney. He certainly would make a better President.