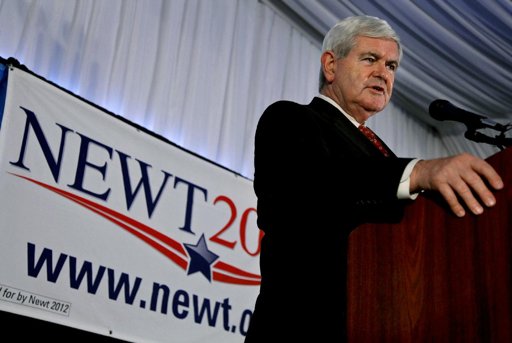 According to the latest Quinnipiac Polls in Ohio, Florida and Pennsylvania. I don’t really call Pennsylvania a key battleground state since it is more than likely to be “blue” in 2012 anyway. But, Florida and Ohio are.

In Florida, which will hold its potentially-pivotal primary on Jan. 31, Gingrich leads Romney, 35 percent to 22 percent, with Rep. Ron Paul, R-Texas, and businessman Herman Cain, who suspended his campaign on Dec. 3, each at 8 percent. When Republicans are asked to choose between only Gingrich and Romney, the former speaker leads by a wider margin, 52 percent to 34 percent.

Gingrich’s 13-point lead against the full field is less than his 23-point advantage in a CNN/Time/ORC International poll released Wednesday. The CNN/Time/ORC poll was conducted among likely primary voters, while Quinnipiac surveyed all registered Republicans.

In the Florida general election:

Obama approval in Florida is at 41% vs. 54% disapprove of his job as President. Independent voter approval is at 33% vs. 57% disapprove and white voters approve 30% vs. 66% disapprove.

Ohio’s presidential primary is currently slated for June — though it may yet be moved to March. Gingrich leads Romney, 36 percent to 18 percent in the matchup with the full field, an advantage that grows to 27 points in a head-to-head contest.

In the Ohio general election:

The full Quinnipiac Poll is here.