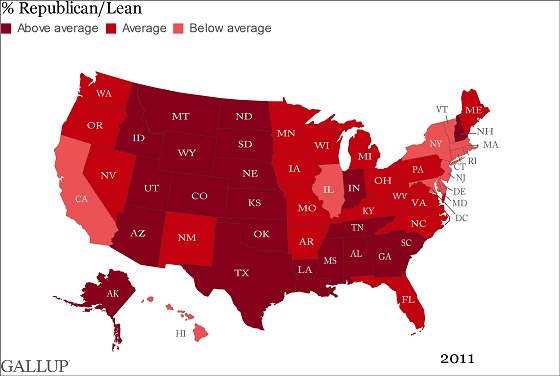 According to the latest Gallup analysis.

Democrats have lost their solid political party affiliation advantage in 18 states since 2008, while Republicans have gained a solid advantage in 6 states. A total of 17 states were either solidly Republican or leaning Republican in their residents’ party affiliation in 2011, up from 10 in 2010 and 5 in 2008. Meanwhile, 19 states including the District of Columbia showed a solid or leaning Democratic orientation, down from 23 in 2010 and 36 in 2008. The remaining 15 states were relatively balanced politically, with neither party having a clear advantage.

Remember in 2008 after the Obama victory when the LEFT blogs and MSM sites were crowing that the Republican Party had become merely a “regional” party?

Looks to me that the same can be said of the Democratic Party today. New York, Illinois and California and their large urban populations are the major portions of the 2012 Democratic Party – hardly a majority in America.

A more extensive chart of state by state data is here.

So, Republicans cheer up!

The GOP controls the House and may very well win control of the U.S. Senate in November.

As for the Presidency, the race may be tough, especially with an improving economy, but the gains made since 2008 have been staggering. Obama and the Democrats WILL have a race on their hands this summer and fall.

In the last four years, the political leanings of Americans have increasingly moved toward the Republican Party after shifting decidedly Democratic between 2005 and 2008. In 2008, Democrats had one of the largest advantages in party affiliation they have had in the last 20 years, likely because of the unpopularity of President George W. Bush in the latter years of his presidency. Prior to that, the parties were more evenly balanced. So the movement away from the Democratic Party may just be a return to a more normal state of political affairs from an unusual situation, rather than a rejection of the Democrats per se.

The net result of the movement is that the nation looks to be essentially even in terms of its party loyalties headed into a presidential election year. Clearly, President Obama faces a much less favorable environment as he seeks a second term in office than he did when he was elected president.

Also, here is a chart of the states with the most competitive party affiliation (really the key battleground states for 2012):