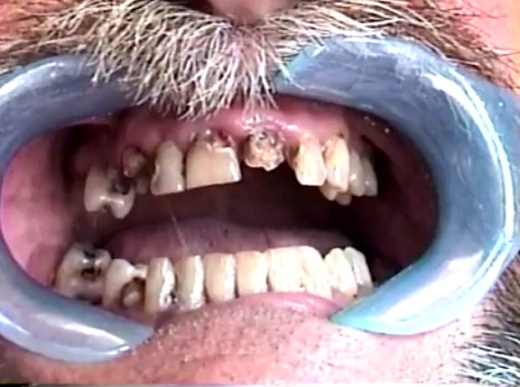 The effects of Methamphetamine on the Teeth – Meth Mouth

Perhaps, according to a new study. Here is the abstract.

Abuse of methamphetamine (meth), a potent central nervous system stimulant, has been associated with significant dental disease. Current descriptions of “meth mouth” are limited in their scope and fail to illuminate the potential pathogenic mechanisms of meth for oral disease. The purpose of this pilot study was to characterize the oral health of subjects with a history of meth abuse as compared to nonabusing control subjects. A total of 28 meth abusers and 16 control subjects were enrolled. Interviews and surveys regarding meth abuse, dental history, oral hygiene, and diet were collected. A comprehensive oral cavity examination including salivary characterization was completed. We observed significantly higher rates of decayed surfaces, missing teeth, tooth wear, plaque, and calculus among meth abusers. No significant difference in salivary flow rates were noted, yet results showed significant trends for lower pH and decreased buffering capacity. These findings suggest that salivary quality may play a more important role in meth mouth than previously considered. Salivary analysis may be useful when managing a dental patient with history of methamphetamine abuse. (Quintessence Int 2012;43:229–237)

So, what causes Meth Mouth?

The ADA lists the suspected causes as dry mouth, poor oral hygiene, frequent consumption of sugary and carbonated drinks, tooth grinding and clenching, and possibly the acidic nature of MA itself.

In a study in ISRN Dentistry (June 26, 2011), street samples of MA had pH levels from 3.02 to 7.03, with 72% of samples below the critical pH point of 5.6, i.e. able to cause significant damage to tooth enamel if abused by a route that brings MA into contact with the oral cavity.

Although this would seem to indicate that injecting MA rather than smoking or snorting it may lead to less enamel damage, this hasn’t been borne out by the research. Researchers at the University of California, Los Angeles (UCLA) reported in the Journal of the American Dental Association that, among abusers of MA, IV users actually had a higher prevalence of oral disease and missing teeth than those who smoked MA, probably due to more advanced addiction and greater self-neglect.

“Those who use MA may make the transition from noninjecting drug use to injecting drug use, as their dependence on MA becomes more severe,” Vivek Shetty, DDS, DMD, professor of oral and maxillofacial surgery at the UCLA School of Dentistry and lead author on the JADA study (March 2010, Vol. 141:3, pp. 307-318), told DrBicuspid.com.

“The injected substance has almost 100% bioavailability, and the onset of the drug high is fairly rapid, generally 15 to 30 seconds.”

It is interesting that IV Meth users have more dental disease than those that smoke the drug. One would think that the constant heat and dehydration of the oral tissues would contribute to more dental destruction. But, perhaps, the more intense rush from IV drug use leads to more self-neglect.

In any case, salivary analysis of patients may give dentists a better idea of the mechanism of addiction and how to combat it at an early stage.

Watch below an embedded video below from a dentist colleague, Dr. Mitchell A. Goodis, DDS in Northern California and his interview of the many methamphetamine user patients, whom he has treated.

One thought on “Does Saliva Quality Play an Important Role in Meth Mouth?”