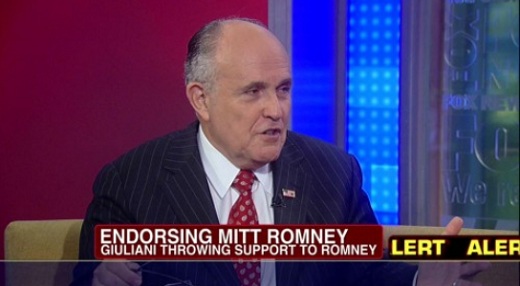 A little late in the game since Mitt Romney has already locked up the Republican Presidential nomination with Rick Santorum’s suspending his campaign. Newt Gingrich will NOT be able to beat Romney in delegates to the GOP Convention.

You might be wondering why Rudy, the former New York City Mayor has waited so long? This is an easy one – Rudy doesn’t like Mitt much – especially since the 2008 campaign when Romney pushed personal details to the press about Giuliani’s wives and family.

Ed over at Hot Air has transcribed the quotes:

When you have one of these things, it leaves animosity, no doubt about it.  The only time it didn’t happen was with John McCain, because John was an old friend, and we sort of palled around a lot when we campaigned against each other, told a lot of jokes. Usually, ones I can’t repeat.  I love John.  I almost didn’t run because John was running, so it was easy for me — I just got out and supported him.  I see that [toughness] as a virtue.  I don’t think the Democrats have any idea what they’re running against.  I mean, Mitt Romney is a tough, tough campaigner, and his campaign organization is really tough.

I agree with Rudy about Mitt Romney being a tough campaigner. Mitt has not spend the last 5-6 years of his life not to give Obama a race he will remember.

But, I, also, understand Rudy’s hope for another GOP Presidential nominee. And, Rudy won’t be waiting for a call from Mitt for any cabinet position either.

Rudy did what a good GOP party man does – but he doesn’t have to like it.