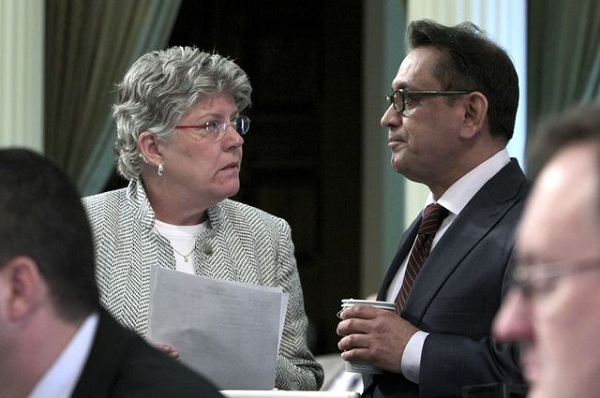 According to a Democratic Party/consultant poll.

Assemblywoman Julia Brownley (D) led state Sen. Tony Strickland (R) in the race for the 26th district, according to a poll conducted for the Democrat’s campaign and obtained by Roll Call.

In a top pickup opportunity for Democrats, Brownley topped Strickland by 4 points, 48 percent to 44 percent, in the competitive battle for this open, Ventura County-based seat. While Brownley’s lead was within the margin of error, Democrats view this poll as a good sign for her in what could be among the closest House races in California.

45 percent, and Democrats ahead, 46 percent to 42 percent, in the generic Congressional ballot test.

And, if you believe this spin, I have a briide to sell you.

In any case, the 400 likely voter sample polling result showing Brownley up by 4 points was within the margin of error, which was 5.9 per cent.

Republican Tony Strickland has over a $ 1 million in cash on hand and Brownley has been AWOL in doing Ventura County events where she supposedly now lives after moving into the Congressional District from Santa Monica.

The carpetbagger Brownley is not going to receive a too warm a welcome in conservative Thousand Oaks and Camarillo. And, the Obama driven election turnout will be down from 2008 levels. In other words, the more Democratic vote of Ventura, Oxnard and Santa Paul will not be robust for Brownley.

By the way, if you are interested Republican California State Senator Tony Strickland is leading a Ventura beach clean up this weekend in the District.