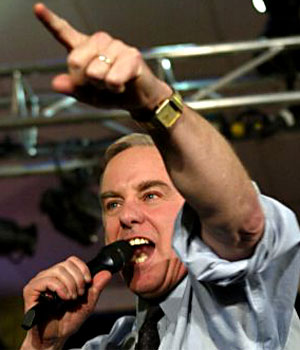 First it was Howard Dean:

Howard Dean, appearing before the Take Back America convention, denounced the idea of having to stand in line 8 hours to cast a vote. Agreed. He then continued:

â€œRepublicans, I guess, can do that â€™cause there are a lot of them that have never made an honest living in their lives.â€

From the June 2 edition of The Rush Limbaugh Show:

LIMBAUGH: The two to three big opportunities so far mentioned by Howard Dean — pension portability and changes to election laws. … So portability of pensions. What’s the second one? Oh, yeah, Election Day a holiday. And well, you know — I don’t know why they need to do that. Most of their voters don’t work anyway, so I don’t know how that’s going to help them that much. At least in a percentage basis.

So, both have big mouths and have put their respective foots in it.

Rush is an entertainer ….. and Dr. Howard Dean is the Chairman of the Democrat Party.

The good Professor Bainbridge has this post on Howard Dean:

Howard Dean was defending another of his comments Friday after telling liberal activists a lot of Republicans “have never made an honest living in their lives.” (Link)

Somebody really ought to buy Dean a newspaper, so he can keep up on stories like this:

The Democratic Party, the self-proclaimed defender of the middle class, was trounced by Republicans among those voters in the 2004 election, according to a Democratic advocacy group that says the party faces “a crisis with the middle class.”

A report released yesterday by Third Way says support for Republicans begins at much lower income levels than researchers had expected: Among white voters, President Bush got a majority of support beginning at an income threshold of $23,300 — about $5,000 above the poverty level for a family of four.

It’s not just that Dean’s obnoxious, it’s that he’s either an idiot or a liar.

Professor, how about the term MORON?