Sen. Joe Lieberman, D-Conn., right, speaks to parishioners with the help of an interpreter at Iglesia Cristiana El Buen Pastor in Bridgeport, Conn., Sunday, July 30, 2006. Lieberman and his challenger Ned Lamont campaigned in Bridgeport churches, each reaching out to black and Hispanic voters to support their candidacies for the Democratic nomination for Senate.

Al Sharpton and Jesse Jackson will hit the trail today in support of the man challenging Sen. Joe Lieberman in the Connecticut Democratic primary.”I think Joe Lieberman is a nice and decent man . . . but his policies are not what the party ought to be standing for,” Sharpton told The Post yesterday.

“He has been much more aligned with George Bush” on specific issues than he should be, Sharpton said.

As the pandering to core Democrat constituencies continue. 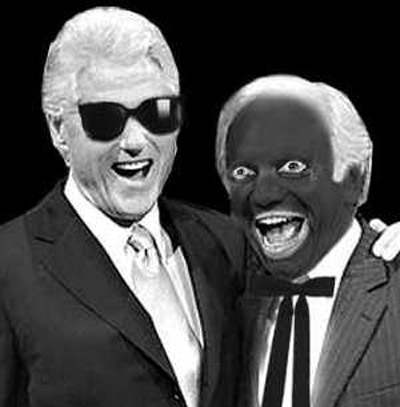 Those lefty netroots folks really want Lieberman’s hide. They may get it next Tuesday but a likely loss in November.
Previous: