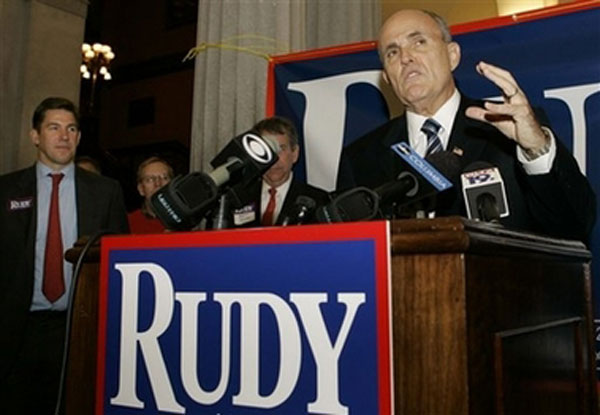 Giuliani: Take Me Or Leave Me

I reminded Giuliani that South Carolina was the site of a vicious Republican primary campaign in 2000, in which John McCain was the subject of venomous attacks by supporters of George W. Bush.

Has it crossed your mind that this may be an extremely rough primary in 2008? I asked him.

“It has, and it will be,” Giuliani replied. But he also said he did not think the attacks would come directly from other Republican presidential candidates.

Giulianiâ€™s positions on abortion, gun control and gay rights are very moderate by Republican standards and some political analysts have said he cannot be nominated because of them. But Giuliani said in the interview he would not change.

“I am not going to change who I am,” he said. “I think that would be a terrible mistake. Better off you vote against me than I change who I am. Because then I couldn’t be an effective president.”

With this background, next we turn to Matt Lewis’s analysis of the piece: Bloggers to Blame for Rudy’s Bad Week?

Is Rudy blaming bloggers for his recent bad publicity?

Rudy’s recent problems have arisen from interviews he granted or speeches he gave.

Debate and argument are healthy for Democracy. And as a conservative, I am happy that we are having these fights now — rather than in the General Election. Imagine if we didn’t find out that Rudy Giuliani was in favor of taxpayer-funded abortion until two weeks before the Genereal Election. In that scenario, we could actually have a Republican candidate who is more pro-choice than the Democrat nominee …

Matt has it WRONG and Captain Ed slaps him back as does K-Lo.

Update: So does AllahPundit

Matt, do Flap a favor and read the whole piece before shooting off your mouth and from the hip.

Rudy is Rudy and may not be the “complete” candidate for all Republicans. But, the Presidential campaign will be about leadership and ISSUES.

Giuliani is RIGHT on both.

And, yes, this is a campaign. Flap thinks the Mayor knows.

Matt Lewis wimps out on a subsequent post where he blames Rudy supporters. WEAK.