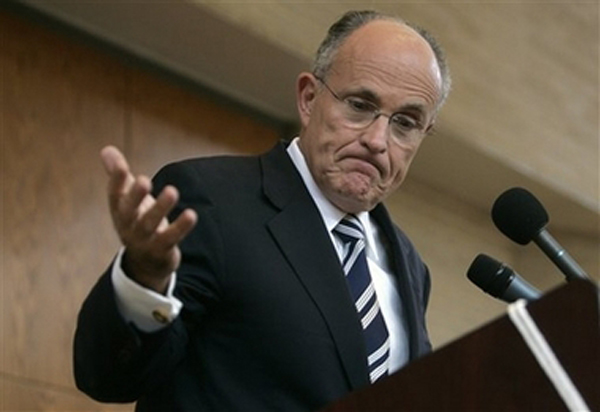 Former New York City Mayor Rudy Giuliani speaks about terrorism and his bid for the presidency at the Jewish Community Relations Council of Greater Washington in Rockville, Md., on Tuesday, June 26, 2007. ‘ Giuliani on Tuesday accused former President Clinton of not responding forcefully enough to the 1993 World Trade Center bombing or later terrorist attacks.

The former New York mayor criticized Democrats, accusing them of weakness and naivete in dealing with terrorism. Giuliani made the comments to about 650 business, corporate and political leaders at Regent University, the conservative Christian college founded by religious broadcaster Pat Robertson.

Giuliani argued that Clinton treated the World Trade Center bombing as a criminal act instead of a terrorist attack, calling it “a big mistake” that emboldened other strikes on the Khobar Towers housing complex in Saudi Arabia, in Kenya and Tanzania and later on the USS Cole while docked in Yemen in 2000.

“The United States government, then President Clinton, did not respond,” Giuliani said. “(Osama) bin Laden declared war on us. We didn’t hear it.”

In hindsight, Giuliani said, maybe it’s all clearer now, “but now is now, and there is no reason to go back into denial, and that is essentially what the Democratic candidates for president want to do: they want to go back, to put the country in reverse to the 1990s.

“I’m not blaming anybody back then,” Giuliani said later in the day at a campaign stop at a Jewish temple in Rockville, Md. “What I am saying is, I do blame people after Sept. 11. Now you have to get it.”

And Rudy does get it while Hillary Clinton, John Edwards, et al. do NOT.

Flap can hardly wait for the Rudy vs Hillary debates.

When I have video of today’s speeches I will post it here.