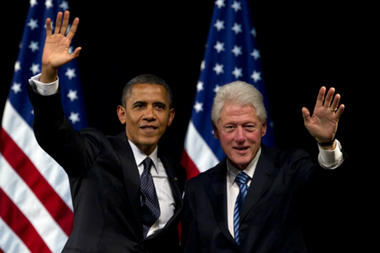 Two-thirds of Americans — 66% — have a favorable opinion of former U.S. President Bill Clinton, tying his record-high favorability rating recorded at the time of his inauguration in January 1993. Clinton nearly returned to this level of popularity at two points in his second term, but has generally seen lower ratings, averaging 56% since 1993.

Here is the popularity chart:

American voters have a short memory and the Democrats have given Bill Clinton a Democratic Party Convention primetime speech.

Former President Bill Clinton will assume a high-profile role at the Democratic National Convention in September, including a prime-time address in a slot typically reserved for an incumbent vice president. Clinton will speak on the third night of the convention in Charlotte, N.C., the evening before President Obama will formally accept the party’s nomination at Bank of America Stadium, campaign and DNCC officials tell ABC News. Vice President Biden will share the stage with Obama on Thursday, Sept. 6,  delivering his own solo address before the president speaks, the officials said.

But, the Romney folks will be happy to remind them that Barack Obama is NO Bill Clinton.

“There will be people who say it helps Obama, but they’re already voting for him,” says Larry Sabato, a political scientist at the University of Virginia, Charlottesville. “And it will just remind people that Obama is no Bill Clinton when it comes to the economy.”  Clinton, of course, governed during a rare stretch of peace and prosperity, leaving office with the federal budget in surplus. There’s no doubt that he will point out the dire economic straits that Obama inherited from his predecessor, President George W. Bush. But increasingly, voters are tired of the blame game and just want Obama to present a credible plan for the next four years.

I don’t think Bubba’s speech will make too much of a difference in helping President Obama. This choice was an internal Democratic Party choice to keep Bill and Hillary on the Obama reservation during the campaign.


Asked to compare Barack Obama with George W. Bush, Americans are more inclined to say Obama has been a better (43%) rather than a worse (34%) president, with 22% seeing no difference between the two. Obama compares much less favorably to Bill Clinton, with half saying Obama has been worse than Clinton and 12% saying better.

These results are based on a Sept. 15-18 USA Today/Gallup poll. Obama succeeded Bush as president during a down economy that is still struggling to recover. Thus, a key comparison voters will make is whether Obama is doing better than his predecessor, which would enhance his chances of re-election, or worse than Bush, which makes it less likely Americans would reward him with a second term.

It could be argued that saying Obama has been about the same as Bush is also a negative evaluation, given that Bush left office with low approval ratings and Americans generally did not judge his presidency to be very successful.

Indeed, those who say Obama has been about the same as Bush generally view Obama negatively, with 27% approving and 62% disapproving of the way Obama is handling his job as president.

Thus, in order to win re-election, Obama likely needs to convince voters he is doing a better job than his predecessor did.

After the debate last night in Florida, unless another candidate enters the field, it looks like Mitt Romney will be the candidate that will limit President Obama to one term and one term only. With economic conditions the way they are nobody will buy the argument that Obama has been doing a better job than Bush. 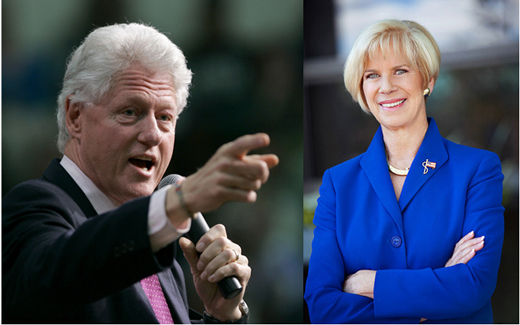 As many political pundits predicted before the November 2010 elections, Pesident Obama’s poll standings and re-election endeavors would IMPROVE should the GOP take over the House and win more U.S. Senate seats.

The latest Gallup Poll reveals this – although American voters want Obama to move ideologically to the right.


Recent Gallup polling finds Americans believing Obama’s leadership could be stronger — particularly with respect to bringing about changes the country needs. Americans are nevertheless more optimistic than not that he will do better a better job over the next two years, even though half expect no change in his performance. In fact, they are more optimistic that Obama, personally, will do a better job than they are about the prospects for government as a whole.

The economy’s direction over the duration of his term will be a major factor in how the public ultimately regards Obama. At this point, Americans are nearly as optimistic about the economy as they are about Obama, with net optimism exceeding 20 points for each. While the president’s ability to directly affect the economy is somewhat limited, he will have more control over how Americans view his political ideology. The new poll suggests that he would fare best on that score by adopting more conservative policies, rather than adopting more liberal ones or even standing still. With Republicans wielding more power on Capitol Hill, that could also help Obama satisfy Americans’ desire that Republican and Democratic leaders focus on finding common ground.

How does this work for the GOP in defeating Obama in 2012?

History show us with Bill Clinton’s re-election in 1996 after the GOP takeover of the House in 1994. Clinton’s move to the right and his triangulation worked.

Day By Day by Chris Muir
When former President Bill Clinton took over the presser for President Obama the other day, I think America breathed a collective sigh of relief. Whether the Obama-GOP tax cut deal is good for the country will be decided by the financial markets in the months ahead. But, having Bubba there, the successful President, is reassuring since Obama has been a colossal failure.

Will journalists now be asking: What would Bill Clinton do – on every issue?

Or rather, is Hillary NOW available to run in 2012?


Bill Clinton implored Democrats to back the tax-cut deal that President Barack Obama negotiated with Republicans as the former president made a surprise appearance at Obama’s side in the White House briefing room Friday.

“I don’t believe there is a better deal out there,” Clinton told reporters who’d been summoned at a moment’s notice to see the former chief executive back the current one. Clinton and Obama had just finished a private meeting in the Oval Office.

Obama said it was a “terrific meeting” and then turned the podium over to Clinton.

The voluble former president took it away, and Obama left part-way through his remarks, saying he had holiday parties to attend.

“Both sides are going to have to eat some things they don’t like,” Clinton told reporters. “We don’t want to slip back into a recession. We’ve got to keep this thing going and accelerate its pace. I think this is the best available option.”

Sheesh, now Obama is bringing in Bubba to do the triangulation for him.

I am increasingly skeptical of this Bush-Era Tax cut deal with President Obama.

When Harry Reid starts to add the pork over the weekend to the deal “framework,” the GOP should say thanks but no thanks.

The Republicans who gain control of the House and more Senate seats in January should vote to extend unemployment benefits for a short period of time (maybe three months) and vote for the continuing resolution to keep the government operating.

The Senate Republicans should then filibuster/block the rest of the lameduck seesion, knowing a better outcome will come with the new year.