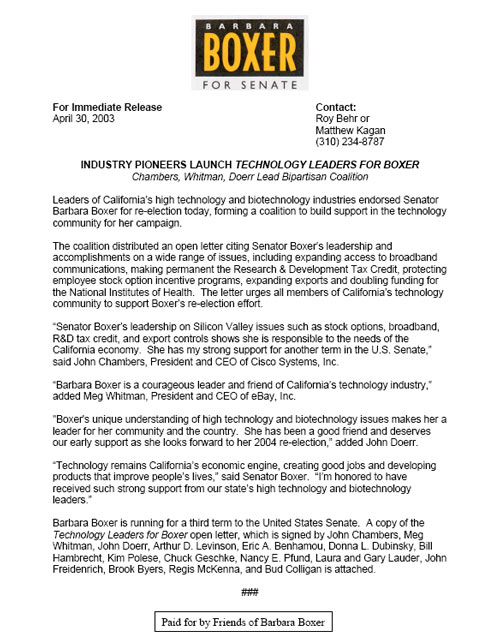 Meg Whitman has already been struggling with her GOP bonafides with her recent re-registration from a DTS (Decline to State) voter to the Republican Party and this revelation will not help her – AT ALL.

“Whitman contributed $4,000 to Boxer in the 2004 reelection campaign — and endorsed Boxer as a part of Technology Leaders for Boxer,” confirmed Boxer aide Rose Kapolczynski today.

And, she signed an “open letter” appealing for support from the California technology executives, touting Boxer as a “dynamic and courageous leader” on the tech front.

Whitman’s name was included in a “Friends of Boxer” release when the committee of a dozen technology leaders was formed in 2003 to assist the California Democrat in her 2004 re-election effort, which pitted her against GOP former Secretary of State Bill Jones.

The move by Whitman to back the Democratic junior Senator came about because “in the spring of 2003, some technology leaders were interested in announcing their support for Boxer, so our campaign went out and talked to a wide range of leaders. And Meg Whitman was among them,” Kapolcyznski said.

“She agreed to endorse the Senator…there was a fundraising event in Silicon Valley later in the year and Whitman maxed out to the campaign,” she said.

Looks like the race for California governor in 2010 will be California Insurance Commissioner Steve Poizner’s to lose.

And, how will this affect former Hewlett-Packard CEO Carly Fiorina’s bid to unseat Barbara Boxer?

If Carly Fiorina decides to run, that is.