Former California Sen. Barbara Boxer has registered as a foreign agent for Hikvision USA, the American subsidiary of a Chinese surveillance company that has been blacklisted by the U.S. government.

Boxer, a Democrat, registered the work through Mercury Public Affairs, the prominent lobbying firm that she joined as a consultant early last year.

Boxer’s registration form, filed through the Justice Department under the Foreign Agents Registration Act, says she will be “providing strategic counsel” to Hikvision, which produces surveillance equipment for the Chinese government and Chinese military.

The Trump administration has cracked down on investments in firms linked to the Chinese government, including Hikvision and Huawei.

The Commerce Department added Hikvision to a trade blacklist on Oct. 8, 2019, for “repression, mass arbitrary detention and high-technology surveillance” of Muslim Uyghurs in China’s Xinjiang province.

Hikvision, in which the Chinese government holds a 42% stake, also produces many of the cameras used to monitor U.S. military bases, streets and homes, according to a report from The Wall Street Journal on Nov. 12, 2017

Nice work, if you can get it and hold your nose.

It is all about the government and ObamaCare mandates for Boxer and Al Sharpton. Do as WE say, because we (the government) know what is best for you.

Maybe Senator Boxer would like to tell me where the right to buy health insurance is located in the Constitution?

Oh yeah, the religious one is in the first amendment, remember Senator?

Yet, Democrat U.S. Senate majority leader Harry Reid will provide cover for pro-life, Catholic Senators who want to vote NO on the Blunt amendment.

Is California Senator Barbara Boxer worth going to jail?

Probably NOT, but this moron could not control his temper and off he goes.

O’Connell accepted an offer from Judge Terrence Boren to plead guilty if the charges were reduced to misdemeanors, Mievis said.

O’Connell faces up to a year in jail when he is sentenced Nov. 9.

O’Connell was arrested in July after leaving a threatening voice mail at the senator’s office in San Francisco. San Rafael police said O’Connell was upset over supposed harassment by public safety officers and tensions with his neighbor, not about Boxer’s politics.

O’Connell could have faced up to three years in prison if convicted of the felony charges. He remains in custody at the Marin County Jail.

Remember folks, you can disagree with the POLS. But, stick to the issues or you will end up like this guy – in JAIL. 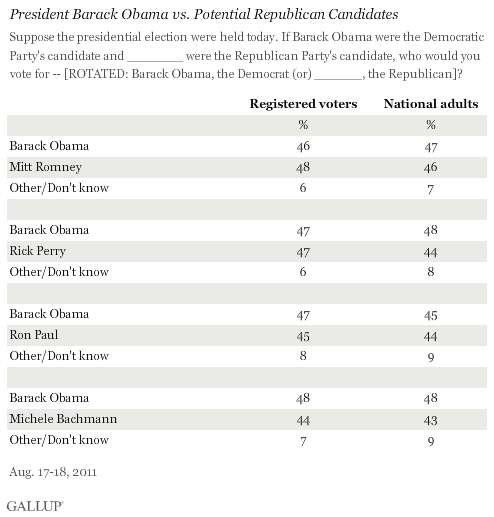 
President Barack Obama is closely matched against each of four possible Republican opponents when registered voters are asked whom they would support if the 2012 presidential election were held today. Mitt Romney leads Obama by two percentage points, 48% to 46%, Rick Perry and Obama are tied at 47%, and Obama edges out Ron Paul and Michele Bachmann by two and four points, respectively.

These prospective election ballots — measured Aug. 17-18, well over a year before the Nov. 6, 2012, election — indicate that the race for president at this point is generally competitive, with voters fairly evenly divided in their preference for giving Obama a second term or electing a Republican candidate. Even though the four Republican candidates tested have varying degrees of name recognition, they all fare roughly the same.

Gallup’s generic presidential ballot — measured six times this year — shows a close race between Obama and a generic “Republican presidential candidate,” although there have been survey-to-survey variations on this measure, with the Republican candidate leading in June and July.

This a poor poll for President Obama’s re-election efforts. Just about any GOP Presidential candidate, including Ron Paul are within striking distance.

Plus, this poses a dilemma of sorts because who does the LEFT attack when any of the candidates that are running for the GOP nomination are in a good position to beat you.


President Obama is at the moment in a rough parity position when registered voters are asked whether they would vote for him in election matchups against four potential Republican candidates. Romney fares slightly better than the other GOP candidates, and Bachmann slightly worse, but these are not large differences. Gallup research shows that these types of election measures at this stage in the campaign are not highly stable, and one can expect changes in the relative positioning of Obama and various GOP candidates in the months ahead.

According to the latest Mason-Dixon Poll.

A statewide poll conducted July 5th through July 7th shows former Massachusetts Gov. Mitt Romney in a statistical dead heat with President Barack Obama in a survey of 629 likely Iowa voters in the 2012 general election.
Romney had 42 percent compared to 39 percent for Obama with 19 percent undecided. Meanwhile, Obama had 47 percent support among Iowans when put head-to-head against U.S. Rep. Michele Bachmann, who had 42 percent while 11 percent were undecided.
The survey was conducted by Mason-Dixon Polling and Research, an independent firm. The overall survey, conducted for the Every Child Matters Education Fund, had a margin of error of plus or minus 3.9 percent.

This is the third key battleground state in the past few days where Romney has either been tied with or leads the incumbent President. The other two were Florida and North Carolina.

See the graphic above which lists the number of electoral college votes possesed by each state. 270 votes are necessary to win.

President Obama had better hope this is a momentary fall for him in the polls and that he will be able to turn it around with campaigning because so far he has been underperforming by every pundits expectrations in the states he needs to win.

As for Mitt Rmney, he will be preparing ads saying he is the GOP nominee that has the best chance to beat Obama – and so far he is correct. 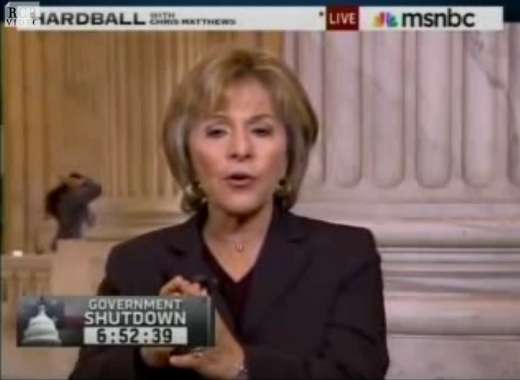 Come on, Barbara, who are you kidding? The Dems could have passed this budget last year but did not because of the political fall out and the November elections.

By the way, notice how Boxer is changing the subject away from budget cuts to abortion and collective bargaining rights/unions.

If the GOP does not hold the line now, even with a shutdown of the government for a while, there will never be any worthwhile budget discipline.

Hold the line Republicans, take the political heat and make the cuts.