Guess poor Chris Schauble has been suspended/demoted/transferred to weekend anchor at KNBC, Los Angeles duty after his WTF moment.

Chris Schauble was reporting an update about Jaycee Dugard, the California woman who was kidnapped in 1991 and held for 18 years in the backyard of a convicted rapist. The video shown, however, was of Abby Sunderland — the 16-year-old girl who went missing for several days last month while trying to sail solo around the world.

The video mixup prompted Schauble to mouth the explicit phrase (which is an abbreviation for “What The Fuck?”) to viewers. It didn’t take Chris long to realize that the camera had returned to two-shot frame and still being filmed.

The network has since issued an apology over the incident. NBC Los Angeles told TMZ Thursday: “This morning one of our morning anchors mouthed an inappropriate word on air. It was inadvertent and we regret the error.”

Kind of a shame for Chris. I enjoyed his early morning banter and his fitness pieces early in the morning. Now, the only good part of the early morning news is the weather and traffic: 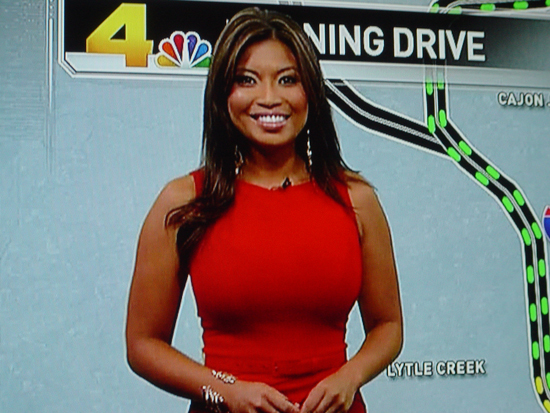 Yeah, I know I am shameless to sneak in a photo of Elita.

But, I met Chris Schauble at the Los Angeles Marathon Expo last March and he was a nice, stand up type of guy. Let’s hope he serves a brief purgatory on the weekends and rejoins the early morning news team.