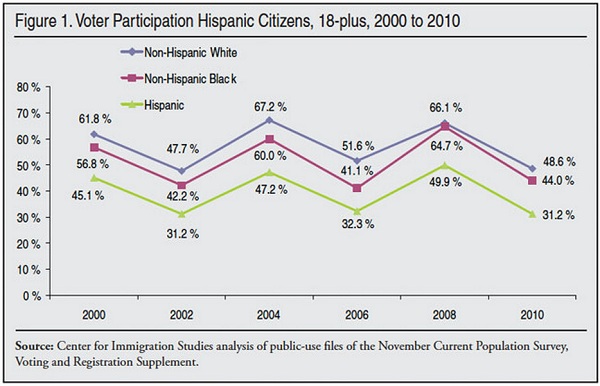 Apparently so in an analysis of recent census bureau data.


Before the 2010 election some commentators argued that the failure to address immigration would increase Hispanic turnout, while others argued it would cause them to stay home. New Census Bureau voting data show that neither of these predictions was correct. Hispanic turnout conformed to the pattern of recent mid-term elections.

Here are the findings: 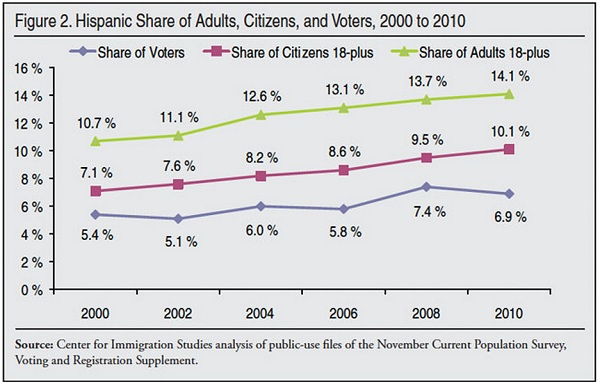 In the next table, you will see the number and percentage of the vote by race and ethnicity in 2010. 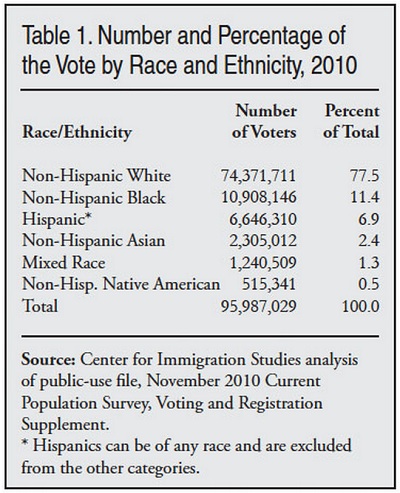 Figure 2 and table 1 show that the Hispanic vote is steadily increasing but continues to be a relatively modest share nationally of the total vote.

Let’s look at Hispanics by state.

The size of the Hispanic vote varied significantly by state and Hispanics are concentrated in five states – California, Florida, Texas, New York and Arizona. As a share of voters, Hispanics were more than 30 per cent of the vote in New Mexico and between 10 and 20 per cent in California, Arizona,Texas and Florida.


There were six states (Nevada, New York, Colorado, New Jersey, Hawaii, and Illinois) in which Hispanics were between 5 and 10 percent of the electorate in 2010. Of these, Nevada and Colorado are often considered battleground states. In most of the other traditional battleground states such as Ohio, Wisconsin, Iowa, West Virginia, Virginia, North Carolina, Pennsylvania, Missouri, and New Hampshire, Hispanics are a small fraction of voters.

So, what this all mean?

Don’t look for Hispanic pandering to be a part of the national GOP election in 2012.

The path to winning the White House through the electoral college will not be through any states where Hispanics vote will make a difference, except perhaps in Florida, where a Cuban American Hispanics have an electoral presence in the GOP primary.