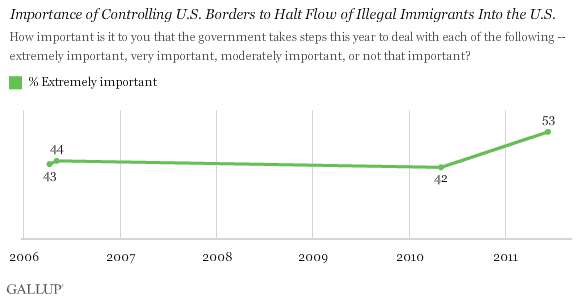 More than half of Americans — 53% — say the need for government action this year to halt the flow of illegal immigrants at the borders is “extremely important,” the first time a majority have held this view in the four times Gallup has asked this question since 2006. Another 29% call it “very important” and 12% “moderately important,” while 7% say it is “not that important.”

The new results from a June 9-12 Gallup poll show an 11-point increase since May 2010 in the percentage rating the issue extremely important. This increase is seen about equally among various gender, race, age, and political party groups, as well as by region of the country.

Concern is slightly higher among men than women, among whites than nonwhites, and among older than among younger Americans. However, the biggest difference is seen by party, with 68% of Republicans rating border control extremely important, compared with 42% of Democrats.

And, what about the illegal immigrants who are already in the United States? There is a greater urgency to resolve the problem.

Here is the graph: 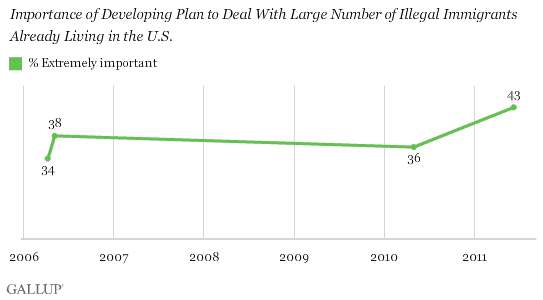 Plus, American continue to favor border control and a plan to halt the flow of illegal immigration rather than developing a plan for those illegal immigrants already here. 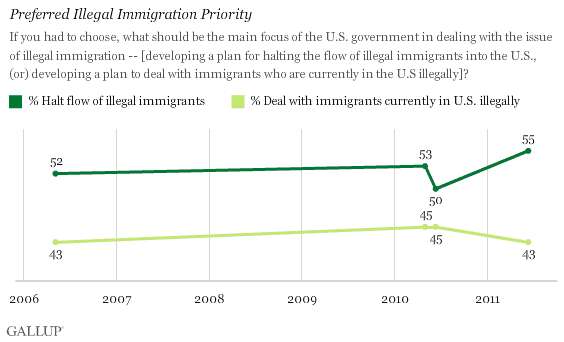 Most Americans favor allowing illegal immigrants who have worked and lived in the United States for years, to apply for citizenship under certain conditions. Or, in other words favor a path to citizenship rather than deportation.

In 2006, former president George W. Bush articulated his support for policies that would allow illegal immigrants already working in this country to apply for citizenship under certain conditions, and 61% of Americans agreed with him at that time. Despite the repeated failure of such bills to make it through Congress, nearly two-thirds of Americans, 64%, continue to support the proposal.

Additionally, 13% would allow illegal immigrants to stay in the U.S. for a limited time in order to work, while 21% favor deportation.

Majorities of Americans across all major subgroups favor creating a path for current illegal immigrants to become citizens, including 56% of Republicans, 62% of independents, and 76% of Democrats. Support is slightly higher in the West (at 70%) than in the South (59%), with support in the East (62%) and Midwest (65%) similar to the national average.

So, what are the implications?

Border control garners the majority of the support versus comprehensive immigration reform. The common GOP line on illegal immigration has been border control first. Then when it is working and can be certified by the Governors of border states with Mexico that it is, then and only then start talking about a plan to deal with the millions of illegal immigrants already here.

I think it is also realistic to believe that going into the Presidential election year, there will be little movement on this issue.

Should a Republican President be elected in 2012 or the GOP takes control of the United States Senate, there may be a bill that emerges. But, if not, the issue will linger and the status quo will remain.