Looks like from this tweet that Amazon.com will be giving the flying fickle finger of fate to the State of California tomorrow. 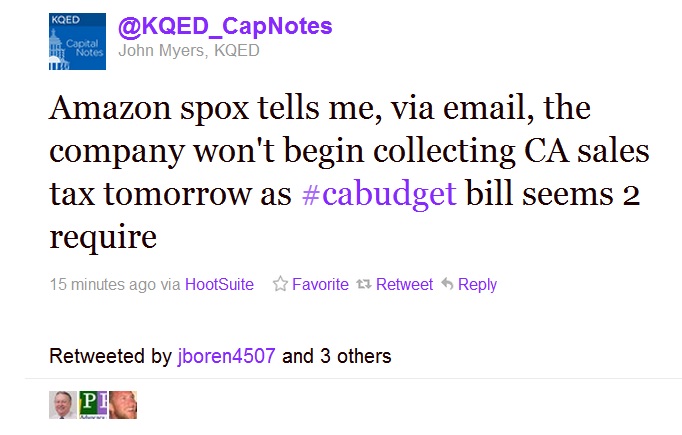 You are aware of the FLAP since I have been writing about this California Legislation for months now. Here is the link to the archive of posts.

But, now it is official I am out as an Amazon.com Associate because of the actions of California Governor Jerry Brown last night.

Shopping at Amazon.com Inc. and other major Internet stores is poised to get more expensive.

Beginning Friday, a new state law will require large out-of-state retailers to collect sales taxes on purchases that their California customers make on the Internet – a prospect eased only slightly by a 1-percentage-point drop in the tax that also takes effect at the same time.

Getting the taxes, which consumers typically don’t pay to the state if online merchants don’t charge them, is “a common-sense idea,” said Gov. Jerry Brown, who signed the legislation into law Wednesday.

The new tax collection requirement – part of budget-related legislation – is expected to raise an estimated $317 million a year in new state and local government revenue.

But those taxes may come with a price. Amazon and online retailer Overstock.com Inc. told thousands of California Internet marketing affiliates that they will stop paying commissions for referrals of so-called click-through customers.

That’s because the new requirement applies only to online sellers based out of state that have some connection to California, such as workers, warehouses or offices here.

Both Amazon in Seattle and Overstock in Salt Lake City have told affiliates that they would have to move to another state if they wanted to continue earning commissions for referring customers.

“We oppose this bill because it is unconstitutional and counterproductive,” Amazon wrote its California business partners Wednesday. Amazon has not indicated what further actions it might take to challenge the California law.

Many of about 25,000 affiliates in California, especially larger ones with dozens of employees, are likely to leave the state, said Rebecca Madigan, executive director of trade group Performance Marketing Assn. The affiliates combined paid $152 million in state income taxes last year, she pointed out.”We have to consider it,” said Loren Bendele, chief executive of Savings.com, a West Los Angeles website that links viewers to hundreds of money-saving deals. “It does not look good for our business.”

Although I did not realize a great deal of money from Amazon.com in this program, since I was getting older and blogging more and practicing dentistry less, I was hoping to make a few more dollars from my blogs. But, I guess as Amazon and others gear up for the lawsuits against the State of California, we California Associates are just out of business.

Good move California Democrats and Wal-Mart. We know where you guys hang out and will sign initiative petitions and vote accordingly. Others will simply move their businesses and employees out of California.

A lose – lose for everyone with no real gains by the State of California.

Here is the final notice from Amazon.com. 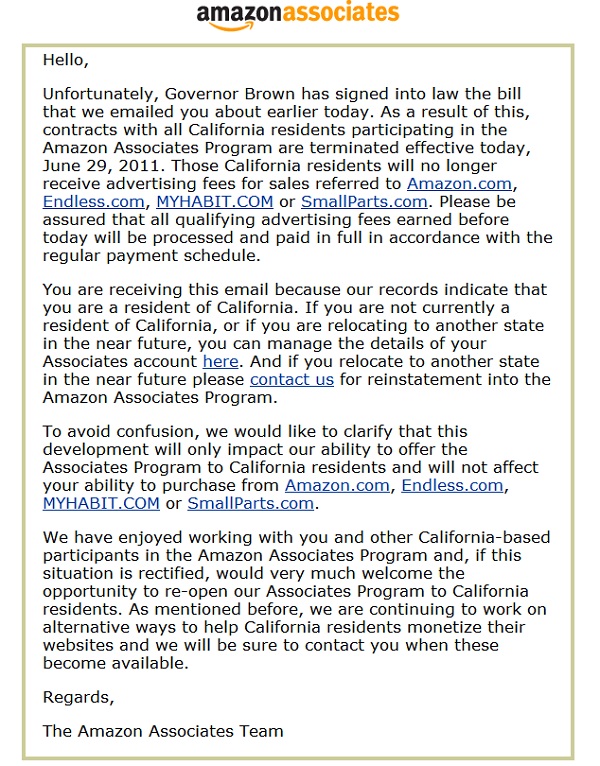