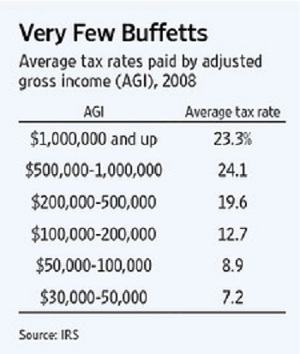 So here we are back at the same old political stand, though even Mr. Obama concedes that today those he routinely calls “millionaires and billionaires” pay at least some tax. The President’s complaint, echoing billionaire Warren Buffett, is that too many billionaires pay a lower rate than regular salary earners. So even as he endorsed tax reform in general yesterday, Mr. Obama insisted that one of his reform “principles” is that people who make more than $1 million must pay a higher tax rate than middle-class earners.

There’s one small problem: The entire Buffett Rule premise is false, as the nearby table shows. In 2008, the last year for which such data are available, the IRS reports that those who made more than $1 million in adjusted gross income paid an average income tax rate of 23.3%.

That’s slightly lower than the 24.1% rate paid by those making between $500,000 and $1 million, probably because the richest are like Mr. Buffett and earn more from capital gains and dividends. The rate for a relative handful of the rich—400 people—fell to 18%, the modern equivalent of Barr’s Gang of 21. But nearly all millionaires still paid a rate that is more than twice the 8.9% average rate paid by those earning between $50,000 and $100,000, and more than three times the 7.2% average rate paid by those earning less than $50,000. The larger point is that the claim that CEOs are routinely paying lower tax rates than their secretaries is Omaha hokum.

If Mr. Obama really wants all of these people to pay even more in taxes, there are only two ways to do so. One is to raise tax rates on capital gains, dividends and other investment income that is taxed at 15% and represents a great deal of income for the wealthy. This is probably Mr. Buffett’s tax secret, though to our knowledge he hasn’t released his returns to the public.

Most pundits acknowledge that President Obama’s speech yesterday was more for his re-election than plausible policy that can actually be signed into law.

Obama sold his “Hope and Change” in 2008, but he and Warren Buffett will have a harder time selling their class warfare.