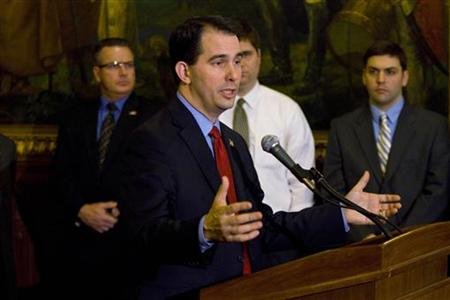 Wisconsin State Governor Scott Walker speaks after signing the ceremonial bill, after the Republican-controlled House and Senate eliminated almost all collective bargaining for most public workers, at the state Capitol in Madison, Wisconsin March 11, 2011

Democratic prospects for recalling Scott Walker are looking like even money right now, an improvement for the party since PPP’s last poll in October when Walker led most of his potential opponents.

Walker continues to be unpopular with only 47% of voters approving of him to 52% who disapprove. Pretty much all Republicans approve of him and pretty much all Democrats disapprove, but what turns the scales against him is that he’s at just 43/55 with independents.

Walker trails both of his most likely opponents in the recall election by narrow margins. Tom Barrett would lead 49-46 in a rematch of their 2010 contest, and Kathleen Falk has a 48-47 advantage. These numbers represent positive movement for both Barrett and Falk who trailed by 2 and 8 points respectively on PPP’s last poll of the race.
Those are tenuous leads for the Democratic hopefuls. In the State Senate recall elections last summer we generally found that sentiment moved away from recalling the incumbents as the election came closer. And Wisconsin voters aren’t exactly dying to remove Walker from office- 49% generally support a recall and 49% generally oppose one…it’s going to take a very strong Democratic campaign to knock Walker out.

It will take a strong campaign to oust Walker and interestingly enough campaign funding of recall elections in Wisconsin have NO  donation limits.

This will be a heavily funded and fought campaign and it will be close all of the way.