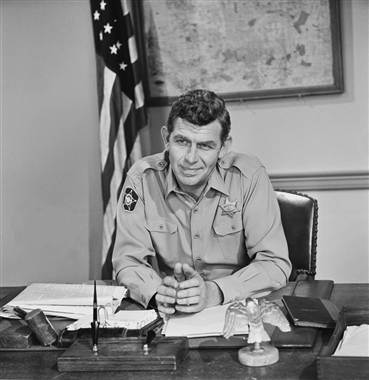 Actor Andy Griffith, who won the hearts of 1960s TV viewers with his role as gentle Sheriff Andy Taylor in “The Andy Griffith Show,” then returned as a folksy 1980s lawyer in “Matlock,” died Tuesday at his home on Roanoke Island, N.C., at age 86, NBC News has confirmed.

Griffith began his entertainment career with comic monologues and moved into movies, debuting in 1957’s “A Face in the Crowd” with Patricia Neal. But it was as the widower sheriff Andy Taylor on “The Andy Griffith Show” that he really made his mark. The show, which also starred comedian Don Knotts as bumbling Deputy Barney Fife, ran from 1960-1968. Its setting, in the fictional, friendly small town of Mayberry, became almost as famous as any one episode.

I am in Indiana and there is a Mayberry RFD restaurant in an Indianapolis suburb. Alice and I will probably head over that way sometime in the next few days.

Andy, thank you for the memories of a simpler American era.