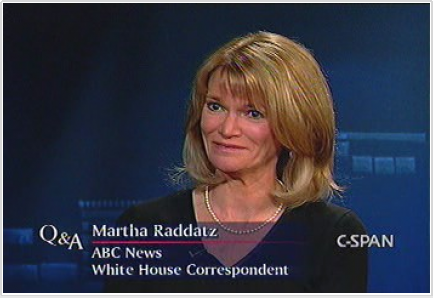 ABC News should replace Martha Raddatz and find another moderator of the Vice Presidential debate on Thursday.

President Barack Obama was a guest at the 1991 wedding of ABC senior foreign correspondent and vice presidential debate moderator Martha Raddatz, The Daily Caller has learned. Obama and groom Julius Genachowski, whom Obama would later tap to head the Federal Communications Commission, were Harvard Law School classmates at the time and members of the Harvard Law Review.

After TheDC made preliminary inquiries Monday to confirm Obama’s attendance at the wedding, ABC leaked a pre-emptive statement to liberal-leaning news outlets including Politico and The Daily Beast Tuesday, revealing what may have been internal network pressure felt just days before Raddatz was scheduled to moderate the one and only vice-presidential debate Thursday night.

Both Politico and The Daily Beast jumped to ABC and Raddatz’s defense. The Huffington Post, another liberal news outlet, joined them shortly thereafter, while calling “unusual” ABC’s attempt to kill the story before it gained wide circulation.

There are other folks in the media business who can moderate the debate and Disney who owns ABC News knows all about impropriety – or at least the appearance of it.

Raddatz should be replaced – the sooner, the better.