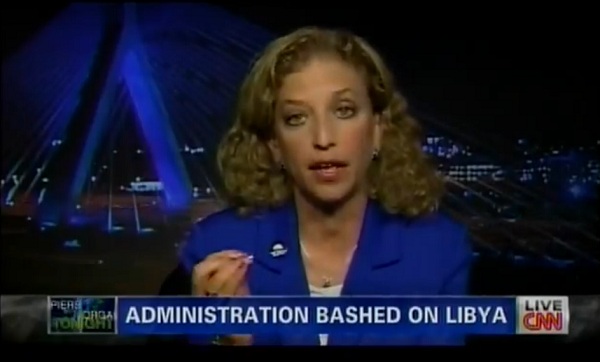 Piers Morgan, CNN: The really important horse that should be flogged is the behavior and the statements of those who are in positions of responsibility and we would assume knowledge. And it’s pretty unAmerican, pretty unAmerican to be putting up completely false statements before you know the facts, isn’t it?

Debbie Wasseerman Schultz, DNC chair: Piers, it is not okay for you to be saying that the administration was putting out completely false statements. They put out information that they had at the time based on the intelligence that they were given —

Piers Morgan: That turned out to be completely wrong.

Morgan: What?! Now wait a minute. If you put out a false statement, then it’s false, it’s wrong. It’s both of those things.

Wasserman Schultz: But you’re suggesting that it’s … Piers, what you’re suggesting is that it was somehow deliberate. It was not deliberate. What they did was it was important to get information out that they had at the time. And they did that. And as they learned more information, they corrected the original information that they put out. But there was nothing sinister here. This was simply the president of the United States and the administration making sure that we did a careful investigation, gave the American people the information that they needed at the time that we had based on our best intelligence and then as more intelligence was gathered we gave the updated information. There is nothing sinister about that.

What’s terrible unfortunate though, is that you do — there’s no around these investigations that Republicans in Congress and Mitt Romney have left to go after the administration questioning whether or not there was any deliberate attempt to mislead. We should be closing ranks, working together to prevent this from happening again.

The Obama Administration put out false, untrue information that the four deaths in Libya, including the American ambassador, were the result of some phony baloney You Tube video. The Libyan deaths were result of a terrorist attack. This is well established early on by Obama’s own State Department.

What Wasserman Schultz is saying is like Bill Clinton saying he did not have sex with that woman – Lewinsky.

Give me a break….