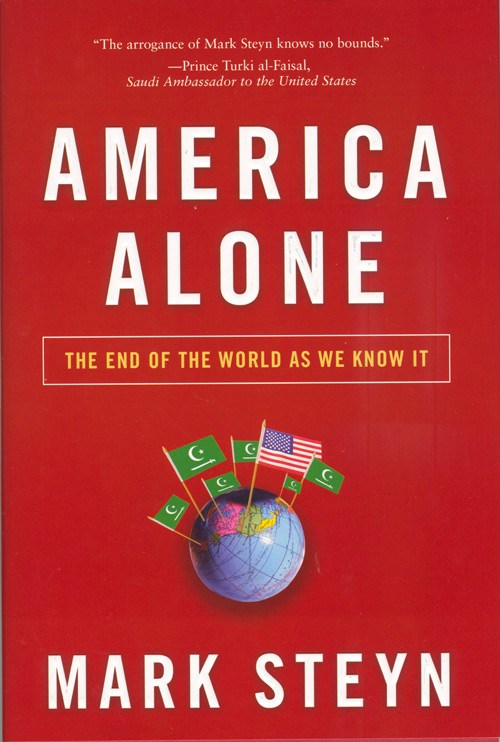 Charges that Indigo is “boycotting” Mark Steyn’s book, America Alone, are ludicrous. Mr. Steyn’s book was for sale at Indigo’s channels in September of this year and it promptly sold out. Indeed we should have purchased more initially but the moment we realized the error, we immediately placed a reorder for several thousand more books. As of this moment, we, as well as most other book retailers in Canada, are still awaiting new copies from the publisher, which we are told will arrive in mid-November.

It is regrettable that Mr. Steyn doesn’t acknowledge that he wrote his Maclean’s piece even though his Canadian sales representative had fully informed him of his book’s reorder status with Indigo. We find it also curious that he chose to unfairly attack Indigo, while most other book retailers in the country are also sold out.

While one has to admire Mr. Steyn’s self-promoting efforts, there is a fine line between publicity and defamation. To make an accusation of “boycott” is a serious allegation and one should not be able to make it just to create buzz and sell more books.

Well, that is good to hear. The new printing of Steyn’s book will have Flap’s photo credit on the back flap.

Mark Steyn Watch: America Alone To Be SMUGGLED Into Canada

A Canadian author’s book about the need to defend Western civilization against Islam’s demographic juggernaut — and the United States’ vital role in that effort — has become a best-seller in the United States, but remains all but impossible to buy at stores in this country.

Conservative columnist Mark Steyn’s book America Alone has shot up best-seller lists: It stands at 13th on The New York Times list and 23rd on Amazon.com.

But Canada’s largest book seller, Indigo Books and Music Inc., does not have the book in stock at its Chapters outlets or its other book-selling subsidiaries.

Mr. Steyn has charged that Indigo and its chief executive officer, Heather Reisman, underestimated demand for his book as a means of “boycotting” it.

His publisher made several attempts to persuade Indigo that its first order of several hundred books was inadequate, he said.

Mr. Steyn wrote in Maclean’s, “If Heather Reisman carries on boycotting me, I should be able to retire to Tahiti within the year.”

Flap supposes the literary elite in Canada prefers not to read what Steyn has written which is the hard truth. So, what better way to censure than to misorder the books and claim it is the American publisher’s fault.

Now, Flap has a vested interest in this distribution of books because at future reprintings I get my name for a photo credit on the back flap (little pat on the back).

Canadian readers (who cannot order their books online and must visit a book retailer) should do what Mark suggests:

“My advice to Canadian readers is drive over to the Buffalo Barnes & Noble and smuggle it back in, cunningly hidden under the Algerian terrorist in the back seat.”

Another example of the failed social democracy of Canada……a waiting line for books.

And it is number two on Amazon’s Canada Best Sellers List.

Travelers entering the United States from Canada will win a reprieve from a post-September 11 border security program requiring passports or other high-tech IDs, under a bill set to pass Congress this week.

Congressional negotiators have embraced a delay of up to 17 months for the program, which was supposed to have been fully activated by December 31, 2007.

The language has been attached to a fiscal 2007 domestic security funding bill the U.S. House of Representatives and Senate plan to approve before going on a recess ahead of November mid-term elections.

Following the September 11, 2001, attacks on the United States, Congress strengthened border security, including checks on some of the millions of people who travel by land into the country.

With only 15 months before the new program was to have started, Bush administration officials recently told Congress of difficulties readying identity cards and equipment to read those cards at border stations.

The Bush Administration yet again demonstrates its lack of resolve for border security.

And why couldn’t the United States government implement this program on time?

Posters and a Web site mocking President Bush have put the spotlight on a small Ontario university that thought a bold and edgy recruiting campaign was just the ticket to attract potential students.

The Web site, http://www.yaleshmale.com, has a black and white picture of Bush, with the caption: “Graduating from an Ivy League university doesn’t necessarily mean you’re smart.”

A link takes viewers to a site for Lakehead University, in rugged Thunder Bay, Ontario, some 1,375 km (850 miles) northwest of Toronto.

“It was literally a tongue-in-cheek way of getting attention,” Frederick Gilbert, president and vice-chancellor of Lakehead University, said on Monday.

“The young people picked it up that way,” he added. “I must say that older generations, well even some of our students, have looked at it as not appropriate.”

Lakehead University seems substantial enough without the denigration of another school or individual.

How do you spell NO CLASS?

Courtesy of Google Trends, here are the countries whose citizens are searching the web for links to the Hizballah hate channel Al-Manar. (Hat tip: Egfrow.)

Michael Ramirez on France, Lebanon and the United Nations

Being a member of a terrorist organization won’t necessarily land someone on Canada’s no-fly list, The Canadian Press has learned.

Proposed criteria would limit inclusion on the roster to those who pose “an immediate threat to aviation security,” Transport Canada internal briefing notes say.

Draft regulations, disclosed by a source familiar with details of the plan, confirm the no-fly list will be tightly focused and reviewed every 30 days to keep it up to date.

“You cannot be put on the list on the sole basis that you’re a member of a ‘terrorist group,'” the source said. “In addition, you have to be a demonstrable threat to aviation safety.”

The source said that under the proposed regulations, people involved in a terrorist group — either now or in the past — could be added to the list only if there were reason to suspect they may “compromise civil aviation, the security of any aircraft or aerodrome, or the safety of the public, passengers or crew.”

Does that mean you have to carry a box-cutter and threaten a flight attendant to be a “demonstrable threat to aviation safety?”

Now, we wouldn’t want to inconvenience any terrorists who want to KILL US, would we?

Remind me to not fly to Canada anytime soon and how about an embargo on flights originating in Canada to the United States?

Captain Ed has Canada To Terrorists: Fly The Friendly Skies

Even if one discounted the 9/11 attacks as a warning to Western aviation in general, Canada shows a remarkable lack of concern for their citizens. Terrorists have hijacked airplanes for at least four decades now. Instead of screening people to deny access to acknowledged terrorists, Canada will need to institute stricter gate security and inconvenience everyone — and still won’t be able to guarantee that the known terrorists won’t do something. A member of al-Qaeda could simply pull open a cabin door at 37,000 feet and have a good chance of killing everyone on board.

Travelers have been warned. (via Hot Air)

Which I guess means Mohammed Atta is okay to fly Air Canada so long as they donâ€™t find out about the pilot lessons.

Ace has Canada Decides Terrorists Have Right To Fly

Isn’t the membership in a terrorist organization ipso facto proof of a threat to aviation?

Did they miss that whole people-jumping-out-of-buildings and towers-falling-to-the-ground kerfuffle a few years back?