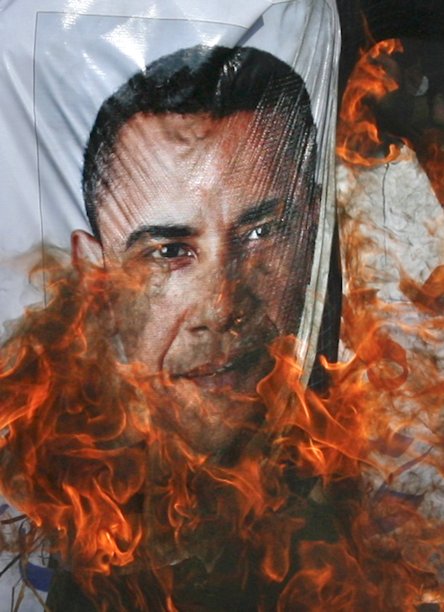 
If it were in a position to do so, Al Qaeda would use Pakistan’s nuclear weapons in its fight against the United States, a top leader of the group said in remarks aired on Sunday.

Pakistan has been battling al Qaeda’s Taliban allies in the Swat Valley since April after their thrust into a district 100 km (60 miles) northwest of the capital raised fears the nuclear-armed country could slowly slip into militant hands.

“God willing, the nuclear weapons will not fall into the hands of the Americans and the mujahideen would take them and use them against the Americans,” Mustafa Abu al-Yazid, the leader of al Qaeda’s in Afghanistan, said in an interview with Al Jazeera television.

Abu al-Yazid was responding to a question about U.S. safeguards to seize control over Pakistan’s nuclear weapons in case Islamist fighters came close to doing so.

“We expect that the Pakistani army would be defeated (in Swat) … and that would be its end everywhere, God willing.”

Asked about the group’s plans, the Egyptian militant leader said: “The strategy of the (al Qaeda) organisation in the coming period is the same as in the previous period: to hit the head of the snake, the head of tyranny — the United States.

“That can be achieved through continued work on the open fronts and also by opening new fronts in a manner that achieves the interests of Islam and Muslims and by increasing military operations that drain the enemy financially.”

The United States damn well better have sufficient assets in the area to prevent the loss of those nukes in Palistan. Or pre-emptively, America should go ito Pakistan and take them. Or, at the very least render them inactive.

A car bombing of the Danish Embassy in Islamabad Pakistan is being linked to protests against the Mohammed Cartoons which rocked the world again earlier this year.

A huge car bomb exploded outside the Danish Embassy in the Pakistani capital on Monday, killing at least five people and wounding dozens more, officials and witnesses said.

The blast echoed through Islamabad and left a crater over a meter deep in the road in front of the main gate to the embassy. Glass, fallen masonry and dozens of wrecked vehicles littered the area. People, some bloodied, ran helter-skelter in a state of panic.

There was no immediate claim of responsibility, but al-Qaida No. 2 Ayman al-Zawahri recently called for attacks on Danish targets in response to the publication of caricatures in Danish newspapers depicting the Prophet Muhammad.

A perimeter wall of the embassy collapsed and its metal gate was blown inward but the embassy building itself remained intact.

Officials at two hospitals reported at least five people – including two policemen – were killed and 32 wounded in the blast, none of them foreigners. It was the second targeting of foreigners in the usually tranquil Pakistani capital in less than three months.

The Danish response is here.

Note the car bomb killed native Pakistanis and NO foreigners.

The Danish foreign ministry advised against travel to Pakistan and the Swedish and Norwegian Embassies have closed.

What a shameful act of displaced and unreasoned radicalism of Islam.

Over 25,000 Pakistanis protested today over Geert Wilder’s film, Fitna and the Mohammed Cartoons.

More than 25,000 people rallied Sunday in the largest protest in Pakistan so far against an anti-Koran film made by a Dutch lawmaker, urging their government to expel the Netherlands ambassador.

“They call this freedom of expression, but it’s freedom of aggression,” keynote speaker Munawwar Hasan, a leader of the main Islamic party Jamat-e-Islami, told the crowd as it chanted “God is great.”

Wearing head bands inscribed “We are ready to sacrifice our lives for the sanctity of the prophet,” they marched for two kilometers (more than a mile), then gathered on Karachi’s main street to listen to speeches.

They also burned an effigy of Wilders as speakers said their government should sever diplomatic ties with Western countries supporting the publishers of cartoons defaming the Prophet Muhammad.

Don’t these fools realize that others in the Western world are criticizing their religion for its hypocrisy especially regarding political, religious tolerance and violence?

Let them protest Wilder’s film and the Danish cartoonists but should others protest or criticize Islam – then off with their head.

Ridiculous if not so sadly pathetic……

More than 25,000 people rallied in the largest protest in Pakistan so far against an anti-Koran film made by a Dutch lawmaker, urging their government to expel the Netherlands ambassador.

And, here is Fitna that is causing all of the protests:

Adam Gadahn as featured on the FBI’s Most Wanted List

Adam Gadahn, the American spokesman for Al Qaeda is missing.

Where is accused terrorist Adam Gadahn?

Thatâ€™s what Taliban sources along the Afghan-Pakistan border are wondering about the American-born al-Qaida member. Gadahn, known as Azzam al-Ameriki (Azzam the American), joined al-Qaida in 2003 and has appeared in several bombastic al-Qaida videos since then.U.S. intelligence officials have heard the same rumors, but tell NBC News that they have no information to suggest Gadahn is dead. They specifically deny that Gadahn was killed in the same Predator missile attack that killed al-Qaidaâ€™s #4, Abu Laith al-Libi, last week near the town of Mir Ali in Pakistanâ€™s North Waziristan province. Gadahn was visiting Mir Ali at the time, according to a local man who describes himself as a friend of Gadahnâ€™s.

Jihadist sources on the Pakistan side of the border are telling local journalists they are worried. One who described himself as a â€œvery close friendâ€ of Gadahn said the 28-year-old California native had until recently been spending most of his time in the populated areas of South Waziristan, near the towns of Wana, Azam Warsak and Shahkai.

What a shame if this traitor has been killed – especially by an American military attack.

This scum bag may have survived only to resurface again to spew his Al Qaeda terrorist CRAP.

Global War on Terror Watch: Adam Gadahn to Be Charged with Treason

Al Qaeda Watch: Adam Yehiye Gadahn – â€œJoin the Winning Sideâ€ Before it is Too Late

Pakistan has relented and lifted their ban of the media giant, YouTube.

Pakistan said Tuesday that it has lifted a ban on YouTube after the website removed cartoons of the Prophet Mohammed, adding that an earlier worldwide outage sparked by its actions was unintentional.

Telecommunications officials told AFP that the popular website was up and running again in the conservative Muslim nation after YouTube removed “highly profane and sacrilegious footage” that was offensive to Islam.

“We have issued instructions to all Internet service providers that YouTube should be unblocked as the specific content has been removed by the website,” Pakistan Telecommunications Authority (PTA) spokesman Khurram Mehran told AFP.

YouTube was not immediately available to confirm whether it had removed the material, which the PTA said was controversial cartoons of the Prophet Mohammed that were republished by Danish newspapers earlier this month.

So, why did Pakistan block YouTube and inadvertently bollock up a good deal of Asia’s internet traffic on Sunday? Some say it was Mohammed Cartoons like this:

Or was it because of a Geert Wilders Promo for his Islamic critical film Forbidden:

Some in Pakistan say it was the Musharraf government preventing local television coverage of voter fraud being broadcast around the world.

Some Pakistani users have expressed doubts over the official reason for Pakistan’s YouTube ban, saying that authorities wanted to block access to footage of alleged rigging in last week’s parliamentary elections.

President Pervez Musharraf’s allies lost heavily to opposition parties in the polls, which were preceded by allegations of massive vote fraud.

“Some Internet users are sceptical that the government banned YouTube because it contained clips from a private television station which showed election rigging,” said Wahaj us Siraj, chief of the Pakistan Internet Service Providers Association.

Internet user Sajid Ali said the ban was unnecessary because Muslims in Pakistan would not want to access blasphemous material anyway.

“No Muslim would want to view the blasphemous content on any website. The government is really disturbed over its defeat in elections and afraid of critical videos and remarks on YouTube,” Ali, a banker, told AFP.